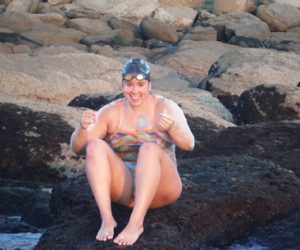 When Katie Scott puts her mind to something, she does it – even if it means jumping into 60 degree water before dawn and spending the next 13 hours, 39 minutes swimming across the English Channel.

“You are not allowed to touch the boat or touch a person,” Katie said of her Aug. 29 swim. “I got stung in the face by a jellyfish, and the water is cold.”

Katie, who swam distance for the Saints, had completed open water swims in Chesapeake Bay, won a distance event off Key West in 2012 and 2013, and was second in a 15-mile swim near Cape May in her native New Jersey. Now an assistant MU swim coach and head coach at Bishop O’Connell High School, she took second in a 24-mile swim in Tampa Bay in 2015. But she’d never done anything quite like this. The channel is 21 miles wide, but because of changing tides, she had to swim 34 miles before reaching Cape Nez-Gris, in northern France.

After arriving in Dover, England, in late August, Katie had a window of about five days to make the crossing, based on weather conditions. “My biggest fear was not getting to swim,” she said. “It is still one of the busiest shipping lanes in the world. Tankers went by carrying airplanes.”

Katie was supported by a boat pilot; her fiancé, Matt Ward, ’14; and a few others. Every 45 minutes she would take in a combination of warm water, Gatorade and a carbohydrate supplement. When things got tough, she told herself to just take it one stroke at a time.

“Only about 522 women in history have done it and less than 2,200 people have done it,” said MU head swim coach Mike Clark. “That is pretty fantastic.”