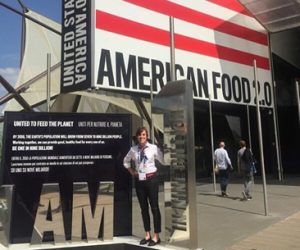 “All you have to do is accept that challenge, and you’ll come out of those four years as the best version of yourself!”

Milan, Italy, is a long way from her hometown of Vernon, New Jersey, but that’s where Kelly Smigen, ’15, spent three months after graduating from Marymount University. Kelly, who earned a degree in communication, worked as a student ambassador for the USA Pavilion at Expo Milano from Aug. 1 through Oct. 31.

“On an average day over 40,000 people came through wanting to learn something about the States, and I’m so happy I was able to be a small part of their experience,” Kelly says.

One memory that always brings a smile to her face began when she saw a woman taking pictures of her husband in front of a map of New Jersey. “I had to go up and introduce myself,” she laughs. “They spoke about as much English as I could speak Italian, but we were able to communicate and have a conversation about his love for Bruce Springsteen and dream of visiting Asbury Park. He was so exited when he realized I was from New Jersey, he shook my hand at least six times while his wife snapped pictures to document the encounter.”

“He stopped to shake my hand and thank me for all my hard work,” she says. “It was incredible!”

A study abroad experience in London in 2013 helped her prepare for Milan. It was her first time leaving the country, and Marymount’s Center for Global Education helped her find the perfect program.

“I went to an English-speaking country with two of my best friends from college,” she says. “I had the combination of comfort and the challenge I needed at the time.”

Kelly, who also played varsity lacrosse and worked as an orientation leader, says Marymount doesn’t just encourage you to learn and grow, it challenges you. “All you have to do is accept that challenge, and you’ll come out of those four years as the best version of yourself!”