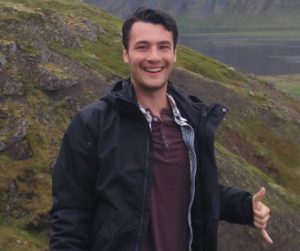 Economics with a concentration in International Studies and Sustainability

Isaiah Cureton is a man on a mission, set to walk with his class of 2017 having earned his bachelor’s degree in business administration in only three years. During that time, he explored study abroad in five programs, served as an SGA Senator, helped found the MU Hockey Club and worked full time his senior year on Capitol Hill in the office of a U.S. senator while taking a full load of classes.

A member of a military family and current resident of Hawaii, Isaiah chose Marymount because it is near D.C. and he valued its professional networking connections, its international campus community and opportunities for study abroad, plus the fact it is a small school that fosters faculty mentoring. In every aspect, Isaiah has found his expectations exceeded.

“Undergraduate research was an incredible experience,” Isaiah explains. “I spent two weeks in El Salvador conducting data qualitative research on migration from Latin America with Dr. Matt Bakker, a tremendous role model in both his research process and his work ethic. Dr. Brian Hollar, the director of the economics program, meticulously guided me every step in laying out my academic path based upon my interests. I cannot say enough about his advice and counsel.”

Isaiah holds a similar enthusiasm for Marymount’s Center for Global Education. “I couldn’t imagine a better study abroad program. The staff is extremely supportive, both stateside and when you are overseas. I began participating in study abroad my freshman year and wasn’t sure where to start. The Center’s guidance – from a short-term study in entrepreneurship management in the Netherlands, summers at the University of Cape Town and the School for International Training in Iceland, to a semester at The American Business School of Paris – just hit it out of the park for me.”

When his fall internship was over in December 2016, Isaiah was asked to stay on by the senator’s staff for another six months because he was in the middle of helping draft a substantial policy initiative on education. Isaiah knows he could not be in a more inspirational place for his personal interests than the Hill. “When I was in high school I didn’t have sports heroes; mine were statesmen in service of the public good. Now I regularly pass some of them in the tunnel or see them on trains. Recently, I looked up from my phone as I passed Senator John McCain, for whom I have immense respect, and I just froze,” he laughs. Isaiah now finds himself in public service, drafting memos, conducting policy research and analysis, and summarizing briefings, hearings and meetings.

“I love the environment and pace of the Capitol. I know I am fortunate to be here, that my bosses are interested in my personal success, and that I have access to such incredible resources,” Isaiah admits. “My plans after graduation are to seek a permanent position on the Hill for a few years before pursing either a master’s in economics or an MBA – hopefully at Wharton Business School, Harvard or UC Berkley.”