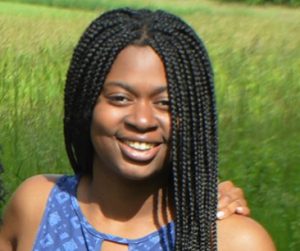 Lauren Coaxum wants you to Think Before You Type. That’s the name — and the message — of the anti-cyberbullying organization she cofounded that promotes positive self-esteem and using the Internet for good. Known as TBYT for short, the site features challenges that encourage others to do something to prevent online bullying. Coaxum also has spoken at schools, churches and special events.

Her message has spread farther than she ever expected.

TBYT has received significant media coverage since Coaxum and her younger sister started it in 2012 after their peers were bullied on Twitter. Lauren was a Marymount undergraduate while Victoria was in high school in their hometown of Douglassville, Pennsylvania.

In the fall, they flew to Los Angeles to receive a “Give a Little Award” from TLC Network, in partnership with Redbook magazine, as one of three national contest winners honored for preventing bullying.

“I’m ecstatic about receiving the award!” Lauren says. “We are in our fifth year of TBYT and it feels amazing to be able to open up our work to a wider audience.” The award included a Redbook write-up.

Lauren is now a student at the Sidney Kimmel Medical College at Thomas Jefferson University in Philadelphia; Victoria is an undergraduate at Duke University.

“At the end of the day, my motivation is to help people,” Lauren says.

She chose MU because it is a small college and she loved how close it is to Washington, D.C.

“I am really happy I decided on Marymount,” she says.

She says the leadership opportunities, her job on campus for four years, the opportunity to study in Belize and Rome, the friendships she made and her professors all helped her grow into the type of person who is succeeding both in medical school and outside of the classroom.

“Take time for others because life is so much better when there’s love in the world.”