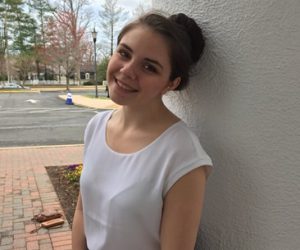 “It was thrilling to add my voice to this historical conversation. It absolutely was the defining experience for me at Marymount.”

In the summer of 2015, Chesney Rhoades found herself a Civil War exhibit curator at Manassas Museum in Virginia. Her road to this honor started the summer of 2014 when she embarked on a multi-disciplinary research project selected for DISCOVER, a Marymount program which funds undergraduate research grants.

Partisans among Playmates: American Childhood in the Civil War is a broad picture of the representations of the Civil War in juvenile literature for the past 150 years. A history of childhood as well as a children’s literature survey, Chesney’s research explores the evolution through each era of how the war was understood and imagined by generations in the context of its ongoing social and racial impact.

The four part exhibit spans the Civil War years and the three subsequent 50-year eras. The content comprises five representative books from the well over 500 that Chesney sourced in her bibliography, artifacts – toys and games of the era – and primary sources, such as letters written by children living in the North and South during the Civil War.

A children’s literature course with English professor Dr. Robert Otten sparked an interest in the topic, which happened to coincide with one of his areas of research.“Dr. Otten and I researched independently, but also in tandem for part of it, so it felt more like working with a colleague. I would not have been able to undertake this scope of independent research as an undergrad at a larger school. The research immersion has well prepared me for graduate work.”

“I knew from the start I wanted to create an exhibit from the research, rather than a paper, because it would be more accessible and engage more people than an academic paper,” she adds. Chesney had a second faculty mentor in Dr. Mark Benbow, assistant professor of history, who has a specialty in public history. “Working with Dr. Benbow allowed me to dig deeply into the mechanics of creating a museum-calibre exhibit.”

Chesney takes her unabashed passion for history, and the storytelling that enlivens it, into her high school classrooms at Walsingham Academy in Williamsburg, Virginia.