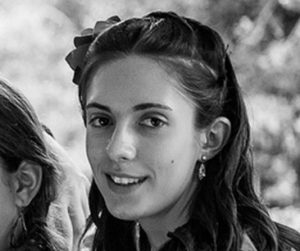 In high school, Leora Lihach did a little acting but never imagined she’d ever write a play. But thanks to Marymount University, she’s done that and much more. Her first work, “Madres de la Revolucion” (Mothers of the Revolution) is based on the real-life testimonioof Commander Nidia Díaz, a mother and revolutionary who endured prison and human rights violations during the Salvadoran Civil War. It grew out of Leora’s honors thesis and was written while she studied abroad at Oxford University in England through the honors program and Marymount’s Center for Global Education.

“My mission with this play has been to create a testament to the belief that shared humanity can reconcile cultural differences,” she says.

Leora, who is teaching herself Spanish, originally sprinkled Spanish words in the script, then added phrases in subsequent drafts with the help of fluent friends. She also immersed herself in first-hand accounts of the Salvadoran Civil War. She knew that as an outsider, she had a responsibility to understand the world of the revolutionaries, their history and narratives.

“I have Marymount to thank for helping me to see that,” she says.

Currently a fellow at Latinas Leading Tomorrow, which works with Latina students in public schools, Leora praised MU for teaching her that true empathy surpasses cultural boundaries and national borders.

“I’m so lucky that Marymount is such an international school with an emphasis on a global perspective,” she says. “That fueled all the work I did and helped make me the person I am today. It’s been a crazy ride and I feel like I’m paving my own path.”

She’s also at work on a second play!