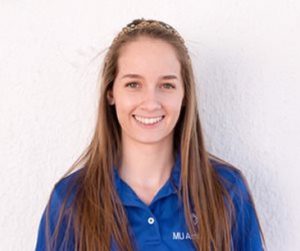 “Marymount invited me to come out of my comfort zone,” says Maria Camarca of Fredericksburg, Virginia.

As a result, she’ll spend the summer analyzing the chemical makeup of comets during a internship at the NASA Goddard Space Flight Center in Maryland. She’ll use a process called spectroscopy, which she became familiar with during an independent research project as a first-year student at Marymount. Camarca credits Dr. Eric Bubar, an assistant professor of biology and physical sciences, for encouraging her.

“He stressed that if you start doing research as a freshman you’ll gain experience over four years,” Camarca says. “At the time, I had no idea how much that specific project would help me.”

She also praised Dr. Todd Rimkus, chair of the Department of Biology & Physical Sciences, for urging her to participate in a three-week trip to Belize to study hawksbill sea turtles, an experience that helped build her confidence enough to apply for the highly competitive internship.

“I was completely uninterested in studying abroad and he approached me a couple times,” she says. “I had never been on a plane before and didn’t think I could do something like that.”

As a senior, she learned about astrobiology and the possibility of interning at NASA, and talked to Marymount’s Vice President for Financial Affairs Al Diaz, who had worked at Goddard.

“I had a lovely visit with him and heard what NASA was like,” she says. “He was great to talk to as well.”

More than anything, Marymount encouraged Camarca to take chances and pursue her dreams.

“I feel like the past year has been full of so many blessings from so many people who helped me understand that this was something that wasn’t out of my reach.”