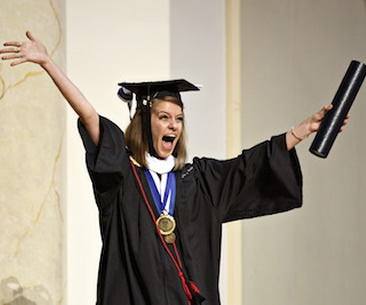 “My first couple of years I was slowly building my leadership skills and growing as I was exposed to different cultures and groups. I have changed as a student, a teacher, a mentor and as a human being.”

The Creative ‘Chaos’ of Culture

When Elizabeth Mueller was deciding where in the world she would go to college, every time she input any of her preferences into a college search program, Marymount popped up. She researched, visited and decided Marymount would offer opportunities larger schools could not.

Once the young woman from a small New Jersey beach town found herself at Marymount, she took advantage of one of the benefits of being an MU undergrad – study abroad. For her, that was a six-week summer intensive at Oxford. And, with guidance from the Marymount Centers for Career Development and Global Education, just a few weeks after graduation Lizee packed up for a new adventure – teaching at the International School of Dresden, Germany.

But her meet-up with the world actually began as soon as she stepped on campus. “At Marymount, I discovered the world is not nearly as big as I thought.” As she sat in a noisy residence hall as a new RA, taking in the color, clothes and creative chaos of culture, she found ways of overcoming the language barrier with new residents in her charge, like the student from the Democratic Republic of Congo. She also remembers clearly sitting next to a young woman from Albania. “Little did I know that in three years she would become the best friend I have ever had. She is my sister who grew up on the other side of the world. If I had stayed in my hometown, if I had gone to another school, I never would have met her.”

Not long after the Centers for Career Development and Global Education put teaching abroad on her radar screen, Lizee attended an international job fair, “kind of a global speed-dating for teachers (Abu Dhabi seated next to Peru),” where she fielded offers from Thailand and South Korea, as well as Germany. Lizee is now a first grade teacher in The Primary Years Programme (PYP) in Dresden, part of the International Baccalaureate, with an inquiry-based approach that helps students become global learners.

The PYP mission mirrors Marymount’s own: to nurture the whole person and to learn from a global perspective. If any additional proof was needed that Marymount was the right choice, Lizee was surprised and humbled at commencement with The Mother Butler Gold Medal, awarded to the undergraduate student who has exemplified the greatest devotion to the ideals of Marymount University.