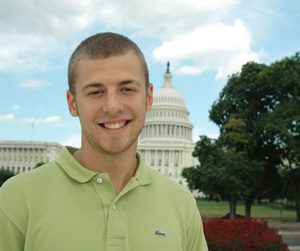 Politics and a minor in Business Law

John graduated with honors from MU with a degree in Politics and a minor in Business Law, and played basketball while a student. His experiences at Marymount, and a suggestion from an MU professor, lead him to pursue a career path that has lead to much success only two years post-graduation.

John grew up in the suburbs of Pittsburgh and was widely recruited to play collegiate basketball. He came to Marymount with his parents partway through his list of scheduled school visits. “The people I met during my visit were awesome,” John said. “Afterward, I suggested to my dad that we cancel my other visits, and he happily did.” John’s reasons for choosing Marymount were two-fold: he wanted access to a city, but not a city-feel to the campus, and because he was interested in Political Science and Business Law, the location next to the nation’s capital was ideal.

While a student at MU, John was extremely active beyond being a student-athlete and team captain. He was vice president of the Student Athletes Advisory Board and the Student Democrats (though he doesn’t have a true political affiliation), member of the National Politics Honor Society, was active in Campus Ministry, and served as a Student Ambassador all four years. “I loved giving personal tours and telling prospective students about the reasons I came to MU and my experiences,” John said.

John had a long list of professors he remembers from his time on campus, particularly Dr. Catherine England, Dr. Linda McMahon, Margaret Tseng, Maureen Smith, and Dr. William Miller who he had for Business, English, and Political Science classes. “It’s cliché to say that you aren’t a number at Marymount, but it’s really true,” he said. “It made such a difference having easy access to your professors, and they really provided guidance in the classroom and for real life.”

He most fondly remembers the relationships he formed with faculty, staff, and other students. One day in the gym, Father Jack Peterson came in to ask if he could shoot hoops with John. John gladly agreed, and they spent some time playing one-on-one basketball and shooting around. “By my senior year, there wasn’t anyone on campus I didn’t know,” John said. He also loved the diversity of campus.

Just prior to graduation in 2010, John was talking with Dr. England about career opportunities. Dr. England advised him to pursue sales, given his political science background and personality traits. John took her advice; he got a job with Insight Global in Vienna, VA, was promoted to manager within six months of graduation, and hasn’t stopped since.

This past January, John took a new job with Celerity Consulting in Washington, DC, where he’s working to break new accounts with Fortune 50 companies and selling four primary services: web and mobile applications; business process management; portfolio and project management; and enterprise technology solutions. “It’s so different from my first job – at Insight it was true staffing, just going out and finding people to fill positions; this is selling high level business solutions,” John said. “At Celerity, I’m the youngest account executive by 11 years, and am really thankful for the opportunity to work in such a great environment and with such high-level clients.”

John has also helped begin a “dot com” startup company called Rentelligence.us, which is a web based solution that helps property managers connect with quality tenants seamlessly through the rental process. “It’s been fun to see a business grow from the ground up,” he said.

John is thankful to Marymount for shaping his personality and skills to help him achieve so much success only two years post-graduation. “Being a Student Ambassador really started shaping my personality for after graduation,” John said. “I also learned to be aggressive, responsible, and organized through my classes and mentoring from professors.”