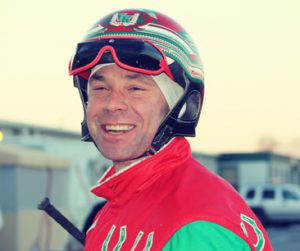 “Only in harness racing you’re going 30 miles per hour behind a thousand-pound animal and these things don’t have brakes,” Kirby says.

But he’d rather sit behind a horse than a desk. After graduating from Marymount, he spent six months in a bank management training program before realizing that it really wasn’t for him.

Having grown up around harness racing, he gave driving a shot. His grandfather had raced and trained horses, and the Delaware horse farm Kirby now owns has been in his family for more than 100 years.

“I’ve been very lucky to have hooked up with the right people,” he says. “Things have snowballed and gone very well. If you don’t do it well, you don’t get paid. It’s not a salary or a commission. It’s performance-based. One day you’re way up, having your best day. Then the next day is your worst. I used to dwell on that. The best way to do it is turn the page and hope it turns out better. Sometimes you get in a slump and can’t do anything right. Or you can be on a hot streak and can’t do anything wrong.”

Kirby says he uses his degree every day, often as a racing spokesman. He once wore a microphone and recorded during a day at the track. The clip, still available on YouTube, shows him remaining calm – and funny – throughout his races.

“Believe me, during my first few years, if they had miked me up it wouldn’t have been quite like that,” he says with a broad smile. “Over the years, you hope you get better. You learn a lot.”

The MU grad has definitely gotten better, recently registering his 4,000th lifetime win at Harrington Raceway, where he’s been the top driver for the past two years. He competes at major tracks on the East Coast and has no plans of slowing down anytime soon.