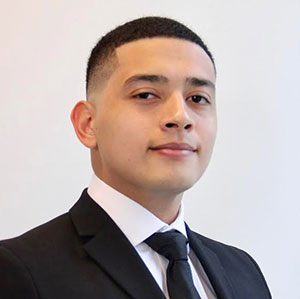 Describe your background and how you ended up at Marymount.

I was born in Virginia, but I grew up most of my life in Honduras. I moved back here to the United States in 2016, graduated high school and enrolled at Marymount. It’s been the best choice I’ve ever made by far regarding academics. I didn’t expect to be at a private Catholic institution ever in my life, so I’m really thankful that Marymount gave me this opportunity to study Communications. It’s something that I’m passionate about, so I’m really grateful for the people, the staff and my friends who made me feel comfortable as I was coming in into college.

What has your academic experience been like in the Communication program?

Pretty good. I definitely have learned a lot of things that I didn’t expect to learn. I didn’t know the importance of communication – to me, I just wanted to go into journalism. But there’s so many rules, ethics you’ve got to follow. It was really crucial for me to adapt, learn and put into practice everything that I’ve learned all throughout college.

What is the importance of ethics in journalism today?

Honesty, integrity, empathy and being neutral. Most days, I feel like I’m watching biased news from every single angle, so it feels like I have to be neutral as much as I can. For empathy, regarding the situation in Ukraine and in other countries that have witnessed war or have been victims of war…it’s crucial to try to understand what their pain is, especially coming from a third world country like Honduras where I’ve seen violence and corruption. And finally, I want to tell the truth and only the truth – because without the truth, there’s no story.

What journalism experience have you accumulated during your college years?

I joined The Banner in the Fall of 2020. I started off as the Opinion Editor, and as soon as seniors graduated, I was promoted to be the Managing Editor alongside my colleague, Ava Gonzalez, who’s the Editor-in-Chief. I’ve been writing a lot about culture, movies, wars, politicians and other sorts of things going on. Additionally, I had an internship with Hola Cultura, a nonprofit organization in Washington, D.C. We worked on an urban heat island effect story and it was published in the Washington City Paper, so it’s something that I worked really hard and I’m really proud of.

Where does your passion for journalism come from?

I was raised in Honduras for most of my life and I witnessed violence many, many times. At one point, there was an attack on my family that could have left me and my brother…we could have died, bottom line. That certainly sparked an interest in journalism, because I know I’m not the only one with those kinds of stories. Learning about the Uyghurs in China, Ukraine, Israel-Palestine, apartheid with Nelson Mandela…reading all those things certainly sparks curiosity in me and I want to know more and I want to inform the world.

Five or 10 years from now, where do you see yourself?