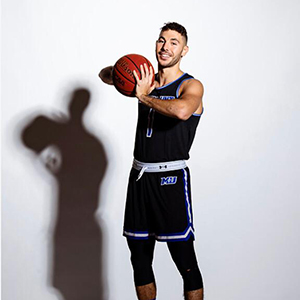 Where do you come from and how did you find out about Marymount?

I’m originally from Tel Aviv, Israel. I served in the military, which is mandatory for Israeli citizens. After I was discharged, I flew to Arizona where I have family and I started my recruiting process. Prior to that, I emailed Coach Rogers from the Marymount basketball team and he wanted me to come visit. I had some other offers from schools on the East Coast, so I flew over here and stayed about a week – traveled to New York, Connecticut and eventually ended up at Marymount.

I felt a connection right away. I liked the guys that hosted me, I liked Coach, I liked how the school looked, how it felt. I grew up in a city – Tel Aviv is a very urban city, so I’m used to that kind of setting. I like how Marymount is just outside of D.C. – it does give you a feel of being in a city. Also, I liked the courses that Marymount offers – for my parents and for myself, it was important to also focus on academics. So after a few days, I called Coach Rogers and told him I’d love to come here.

How did you experience in the Israeli Defense Forces (IDF) prepare you for the grind of college sports and academics?

I think the most important thing I took from it is perspective and valuing the opportunities I have. In Israel, when you graduate high school it’s a no-brainer that you go into the military. Your only option, really, is what route you’ll take in the military. A lot of my friends went into combat units and served and fought in some operations, but I had the privilege – because I was on the Israeli national team – to be offered the option to not do combat service. However, I still had to go to the base every day of the week, Monday through Sunday, and be there at least until 4 pm. And then I played basketball in the afternoons and evenings, so my days would start at 6 am and end around 11 pm. It’s kind of hard to incorporate other stuff with the military because it’s such a big commitment, and you can’t just not show up.

When your freedom is taken away like that, you start to appreciate the little things you had before, like waking up in the morning and deciding what you want to do and not having it decided for you. So when I was in the military, I worked with a sports psychologist and he had gone to college in the U.S. He talked to me about that when I was trying to decide what I wanted to do during the summer before I came to Marymount. He said because I had family in the States and my English was pretty good – why didn’t I give it a shot? ‘It could be the best thing you can get out of basketball.’

How is Marymount preparing you for your future career field?

In my business and marketing courses, I feel like they are really as modern or as up-to-date as you can be. You know, we discuss social media and data a lot, and our professors teach us coding languages and how we can incorporate them with the theory we learn in our marketing books. Through that, we can experience real-life issues we might face in our jobs.

I see the ideas we learn in classes reflected in the internship I have right now, which came through a Marymount alumni. They remembered the University in a good light, and they wanted me to be a part of their organization – not many people can say that!

Why should future students select Marymount as their college of choice?

It’s just a very welcoming environment. We have a lot of international students – so for me, it was like, ‘I’m not just the only guy that’s not American.’ You’ve got a bunch of other international people and we have an international club, and they do events. So that’s, you know, a sense of community when you come in. I think that’s important for you to have a healthy environment to succeed academically and as you grow up as a person.

What I like most about Marymount is they give you the resources and opportunities to make it your own…in a way that you get the chance to leave your mark on the University, whether that’s through athletics or being a student leader like I am, and contributing back and making changes that will last after you’re gone. In other big schools, it might be easier to blend in with everybody else and be one in 10,000…but at Marymount, everyone gets the chance to stand out.

Academically, our professors are very good and our class sizes are small, which I like because you get that relationship with your professor. This helps me be successful because I’m not afraid to ask questions, and I feel comfortable scheduling one-on-ones with professors and getting that extra help if I need it. Also, the location is unbeatable. Getting to be in one of the greatest cities in the world…I’m sold!