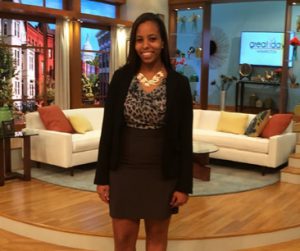 Tylar Abrams, ’16, has wanted to be on television since she was five. “Back then I was determined to be a Disney star like Hannah Montana,” she says with a laugh. These days she’s focused on the news end of things, an interest that blossomed while studying communication at Marymount.

“The program is fantastic,” she says. “They encourage you to get out there and find something you really, really want to do.”

What Tylar really, really wants to do is be an on-air personality or producer. The Laurel, Maryland, native got a leg up on that ambition in the summer of 2014 when she interned with Prince George’s County Community Television as a Roundball Report courtside reporter covering the WNBA’s Washington Mystics. That led to a paid marketing internship the following summer at CBS affiliate WUSA-TV, where she put together ad packages, helped scout clients, went on commercial shoots and gained editing experience. She did so well her internship was extended – twice!

“I soaked up every bit of information they were willing to give me,” she says. That included creating social media content for the morning television show, Great Day Washington, and even producing a two-minute segment on Marymount’s work with GoBabyGo, a program through which the physical therapy department modifies off-the-shelf toy cars to help special needs children gain mobility.

After graduating, Tylar landed a sales job at the station.  It’s a tough business, but one she loves.

“People don’t realize how much the on-air talent does,” she says. “They don’t understand the struggle. They just see the glamour. There’s a lot of fast-paced sprinting behind the scenes to get 10 seconds of air time. Television is crazy but I can’t get enough of it.”