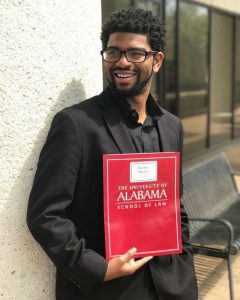 What have you been up to since you were a student at Marymount?

A few days after I graduated, I started studying for the Law School Admission Test (LSAT). I decided that I wanted to attend law school at the end of my sophomore year. I thoroughly enjoyed researching, writing, and problem-solving; a legal career seemed to be the best route for me. It was not until I graduated that I realized how much effort is required to get into law school.

Studying for the LSAT was like prepping for a black-belt test—nothing but practice (Luckily, I’ve already earned a black belt). Studying was my full-time job for a little more than three months. Law school applications are highly competitive and I dreamt of attending the University of Alabama School of Law. I took the LSAT in September and received my results about a month later.

I applied to a small handful of schools and waited patiently for a response. In the meantime, I had the pleasure of teaching middle school in Orlando, Florida. By Thanksgiving, I was offered a scholarship to attend each of the law schools I applied to. Now, I am a J.D. candidate at the University of Alabama School of Law.

What challenges or obstacles did you face in your academic career?

Learning to prioritize my work was a pretty big challenge. I found it difficult to focus in general. If I was having trouble in class, I would often have to physically remove myself from distractions. I would often have to make choices between spending time with friends and reading against a due-date. I had to discipline myself for my academic benefit. Sometimes, that meant I would have to opt-out of some social gatherings and the like. Besides, there is always another chance to hang-out with (or roast) your friends.

How did your experience at Marymount impact your life?

My time at Marymount made me more empathetic towards people in other parts of the world. I always considered myself to be sensitive towards others. However, Marymount’s campus brought so many people of different cultures, and beliefs together in one place. I was introduced to a metaphorical ton of new ideas and customs. It forced me to learn how to treat others who I may or may not understand. It was not too long until I saw myself partaking in the traditions of others and vice versa. Before Marymount, I would never have thought that I would produce a video explaining the Hindu festival of lights celebration, Diwali. Now, I am more open-minded.

What are your future career, service, or other goals?

I want to become an attorney and practice intellectual property law. I became interested in this particular area after following the Robin Thicke/Marvin Gaye controversy in which the former was accused of plagiarizing the latter’s song.  I loved and studied music for most of my life and was incredibly fascinated by the implications of the verdict. Intellectual property law will provide the opportunity to dive into similar issues in a number of fields.

Besides my legal pursuits, I intend to write a novel in the future. I write in my free time to occasionally free my mind from the law. My peers and I still critique one another’s writing like we used to in writing courses, so I suppose I still get to keep a little bit of Marymount with me that way.

What advice would you give prospective students in your field?

If you want to pursue law, it is important to start setting goals for yourself. The legal field is very competitive, but it is also very rewarding to those who both set and meet their goals. Begin dreaming about what you want to do, and then learn about those dreams. Talk to the people you admire, and make yourself a positive presence in the spheres you wish to work in. There is no practical reason to be concerned about how well your peers may be doing. Spend your time focusing on self-improvement and running your own race. There is no less potential in one person than any other, so create an ultimate goal and commit to reaching it.