Academics College of BILT – Business, Innovation, Leadership and Technology School of Design and Art Cody Gallery Past Gallery Exhibitions So Hot You Could Fry An Egg 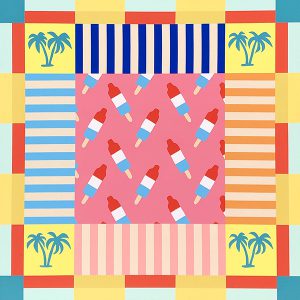 So Hot You Could Fry An Egg:

This is a show about heat; what it makes people do, what it facilitates, and how it fuels our collective pursuit of leisure. The show’s title, “So Hot You Could Fry An Egg” is a colloquial American expression used to describe extreme heat and the implication that should one crack an egg, it would pop and sizzle as if the ground were a frying pan. Through the work of Katie Barrie, Akemi Maegawa, and Caitlin Teal Price, we explore these modes of existing in hot environments.

The most literal manifestation of this expression is Akemi Maegawa’s twelve-foot diameter fried egg, with a yolk made from ceramic stoneware and expansive whites made from foam and soft fabric. Maegawa has titled this work “Your Sunny Side Should Be Up” another riff on a highly American expression, which roughly translates into “fried eyeball” in her native Japanese. The “chair” is intended to be an interactive installation, allowing viewers to lounge on top of the sculpture, meditate, relax and relate to each other. The work is a symbol of hopeful play. Here, heat manifests as the pressures and hardships of our modern world. Through her sculpture, Maegawa encourages viewers to discover life’s silver linings and to take care of one another, rejoicing in happy opportunities for connection. 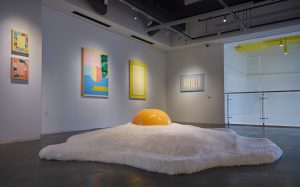 The sun-saturated paintings of Katie Barrie conjure a feeling of candy colored nostalgia, memories of one’s magical summers past or the hope for those to come. Her use of vivid high load acrylic paints and sand collected from beaches across the country offer a visual feast of texture and color. Barrie derives her illustrative titles from the pages of travel brochures and resort propaganda, begging a host of questions; why do people deem vacations the antidote to all of life’s troubles and can you ever truly leave those troubles behind? How does the media sell this idea? And what exactly is leisure and who has access to it? 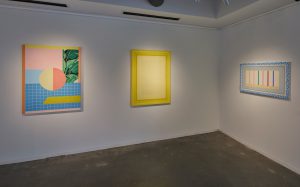 The beach goers captured by Caitlin Teal Price in her “Stranger Lives” series appear to bake in the heat of a Summer day. Each photograph was made between the hours of 12:00pm and 2:00pm from 2008 – 2015 at New York’s Coney Island and Brighton Beaches. Price casts the viewer as voyeur, peering into the unedited lives lived by those who have unwittingly created a telling mis-en-scene atop their beach towels. Clues to their interior lives appear in the form of sunscreen bottles, books, headphones, drinks, boomboxes, phones, snacks, bags and sartorial selections. However, many of these items are so generic that these strangers could be anyone and everyone. Price asks us to consider a universality to sun worship as beaches attract visitors of all ages from a breadth of backgrounds and lived experiences. 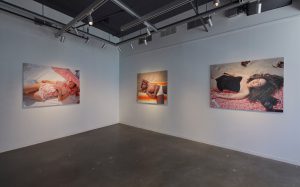 Katie Barrie is an artist based in Richmond, Virginia whose practice analyzes vacation mentality, the aesthetics of leisure, and what it means to live your best life. She received an MFA in Painting & Printmaking from Virginia Commonwealth University in 2019, and a BFA in Art & Design from the University of Michigan in 2011. Her work has been exhibited at Eden Airlines in Richmond, Virginia, the Virginia Museum of Contemporary Art in Virginia Beach, and the Elizabeth Foundation for the Arts Project Space in New York. She has been awarded residencies at the Sam & Adele Golden Foundation, 100 West Corsicana, the Vermont Studio Center, Pocoapoco in Oaxaca, Mexico, and the Mudhouse in Crete, Greece.

Akemi Maegawa is a Washington, DC based artist. She was born and raised in Japan and worked there until her early 30s when she moved to the USA. She graduated from the Corcoran Collage of Art and Design and Cranbrook Academy of Art. She works with ceramics and mixed media and her work often responds to unique perception of western civilization because of her background strongly rooted in Japanese culture and history. Her works look deceptively simple and ironically ordinary.  However, she focuses on the beauty or drama through exploring those mundane objects to search and define a meaning of life.

Caitlin Teal Price is a Washington, DC based artist who works with photography and drawing to explore themes of ritual and routine found in the undercurrents of daily life. She received her BFA from the Parsons School of Design and her MFA from the Yale School of Art. Her work is included in both private and public collections, including the Robert V. Fullerton Museum of Art in San Bernardino, CA and the American University Museum in Washington DC. She has been exhibited both nationally and internationally, including Fotografiska Museum in Stockholm Sweden, Bernarducci Meisel Gallery in NYC and the National Portrait Gallery in Washington, DC. Her work has been published in periodicals such as The New Yorker, The New York Times, and TIME magazine among others. Capricious Publishing NYC published her first monograph, Stranger Lives, in December 2016.