Emma Cregan
Emma Cregan explores the space between the digital and intangible. Cregan studied animation in Virginia Commonwealth University’s Kinetic Imaging program, where she created several short films using puppets and other stop-motion techniques. Her animations focused on family history led to an internship at the Smithsonian Center for Folklife and Cultural Heritage. While working at the Smithsonian, she created short videos and wrote articles about the importance of culture and how traditional knowledge remains relevant in the 21st century. Her interest in cultural heritage led to an internship with The Maa Trust, a non profit in the Maasai Mara working to establish harmony between community development and environmental conservation. Cregan created short video pieces showcasing their efforts to economically empower Maasai women. Her experiences with the Smithsonian Center for Folklife and Cultural Heritage and The Maa Trust inspired her to create art focused on intangibility. She is drawn to animation because it is an exaggeration and distortion of reality. The visuals created are simultaneously familiar and alien, opening the audience’s mind to see the world from a different perspective. Through the distortion of the world created by animation, we can better understand unique perceptions of reality. 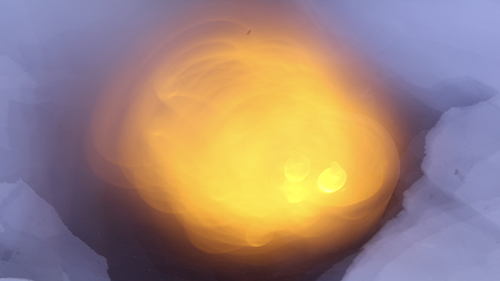 About the work:
“Escaping Light” is a series of five animations created using stop-motion and experimenting with long shutter speeds. The series illustrates the tension between tangible and intangible, each projected video an intersection of light and physical objects. Image: Escaping Surface, 2019, Video Still emcregan.com

Johab Silva
Johab Silva is a native Brazilian who has lived and worked in Washington, D.C. since 2008. He holds a Masters’ Degree in Art Education from Corcoran College of Art and Design. Silva’s ongoing research explores themes of appropriation, materiality, space, and environmental issues. His work has been exhibited nationally and internationally including The Corcoran Gallery of Art, Transformer Gallery, Miami Art Palace and the Santo Andre Museum of Art. His work has been published in The Washington Post, Art in America, and Sculpture Magazine. 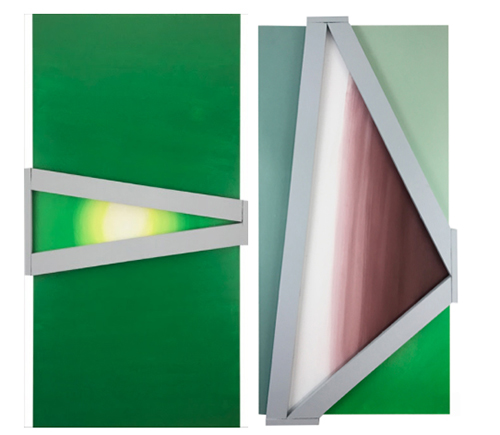 About the work:
The problem of illegal or not planned urban development in green regions has been the force in Silva’s practice in an ongoing investigation beginning in 2016. After researching more about environmental economics and making a field trip to the Amazon rainforest in Brazil, he began to fabricate “Land Survey,” which is a body of work that includes wall pieces, video, sculptures, and a self-published book. This body of work is his response to his endeavor to raise a deeper dialog about probable solutions for environmental balance. Images: Johab Silva, 3°48’32.7″S 48°38’32.1″W, Latex paint on wood, 49.5 x 25.5 (left) and 3°49’00.7″S 48°43’26.0″W, Latex paint on wood, 49.5 x 25.5 (right) johabsilva.com

About the Open Call 2019:
Cody Gallery in partnership with Arlington Arts invited, through an open call, individual artists who live, work, study or maintain a studio in Arlington County, Virginia to submit proposals for a contemporary art exhibition. Two artists were selected to exhibit their artwork from September 6 to October 26, 2019 and will receive one $500 honorarium for their selected proposals. This exhibition was juried by: Meaghan Kent (Director of Cody Gallery, Marymount University), Cynthia Connolly (Special Projects Curator, Arlington, VA), and Dawne Langford (Independent Curator, Artist, and Filmmaker, Washington DC). More information on the Open Call may be found here.

JURORS:
Meaghan Kent is the Director of Cody Gallery at Marymount University. She is also the Founder and Director of Site95. Kent has been a gallery director for the past fifteen years where she managed the careers of internationally emerging and established artists and coordinated exhibitions locally and worldwide. She was previously based in Guadalajara, Mexico where she founded Páramo. Prior to Páramo, she worked at Casey Kaplan, Andrea Rosen Gallery, and I-20. Recent curated projects include: “Border (Untitled)” (with Joe Hicks and Sarah Hardesty) and “That’s Why I’m Here” at Marymount University. With Site95 she curated the “Dead in August” a multivenue series in New York, “P2V: P. Scott Cunningham and Antoine Lefebvre” at Dimensions Variable, Miami, “Trombly Rodriguez: The Fabric of a Space” at the Abrons Arts Center, New York, “Urban Interactions” at the Hillyer Art Space, Washington DC, and outdoor public commissions in Miami, Florida with Patrick McDonough and Sam Trioli. In addition, Kent co-organized “PaintersNYC” with Maureen Cavanaugh at El Museo de los Pintores Oaxaqueńos in Oaxaca, Mexico. Kent completed her MA in art history at George Washington University, Washington, DC and her BA at the College of Santa Fe, New Mexico. She was a participant of Independent Curators International (ICI) Intensive in 2012. Kent has written for several publications including: “ArtHaps” and “Art in America”.

Cynthia Connolly joined Arlington Cultural Affairs Division in 2003 as Curator for the County-run Ellipse Arts Center Gallery in Ballston. In 2010, Connolly became Visual Arts Curator of Artisphere where she curated over 14 exhibits a year to national and international acclaim. Ongoing projects from this period include Art on the ART Bus, an Arlington Transit bus containing rotating exhibits of original work by regional artists. In 2018, she launched the Arlington Art Truck with a National Endowment for the Arts grant, amongst others. She is a photographer, letterpress printer, curator and artist whose work is shown internationally.  She exhibited in Beautiful Losers establishing herself as a pioneer in DIY culture and was reviewed extensively, including Art in America. Her photography is in many private collections as well as the J. Paul Getty Museum, Smithsonian Museum of American History, National Museum of Women in the Arts and the Corcoran Gallery of Art from which she holds a degree.

Dawne Langford is a Washington, DC-based independent curator, documentary filmmaker, and artist. She recently completed a six month project as the director and curator for the Fundred Reserve OPEN LAB, in collaboration with Mel Chin Studios. After many years working in public media as a broadcast TV editor, she transitioned to producing, working on independent documentaries Check It, Kandahar Journals, and Finding Joseph I. Langford also launched a curatorial initiative dedicated to centering traditionally marginalized viewpoints in public discourse around artistic creation. Currently, she is working in collaboration with Georgetown University on a documentary project, working on an art publication with Provisions Library For Social Justice and serving as DCAC’s 2019 Curatorial Mentor. Previous exhibition venues and collaborations include Mel Chin Studios, Transformer, SPRING/BREAK, Olly Olly, Washington Project for the Arts,Torpedo Factory, George Mason University and The Smithsonian Asian Pacific Center’s Culture Lab series, Crosslines.

ABOUT CODY GALLERY:
Cody Gallery is a contemporary art space created as a platform to support the arts and strengthen the arts community at Marymount University and the greater Washington DC area. Exhibitions present work by local, regional and international artists in order to provide groundbreaking and thought provoking work for the community to experience. Events, including artist talks and lectures, are available for students at Marymount University and teh general public at large. marymount.edu/codygallery

ABOUT ARLINGTON ARTS:
Arlington Arts is the presenting brand of Arlington Cultural Affairs Division.  Our mission is to create, support, and promote the arts, connecting artists and community to reflect the diversity of Arlington. We do this by: providing material support to artists and arts organizations in the form of grants, facilities and theater technology; integrating award-winning public art into our built environment; and presenting high quality performing, literary, visual and new media programs across the County.
arts.arlingtonva.us