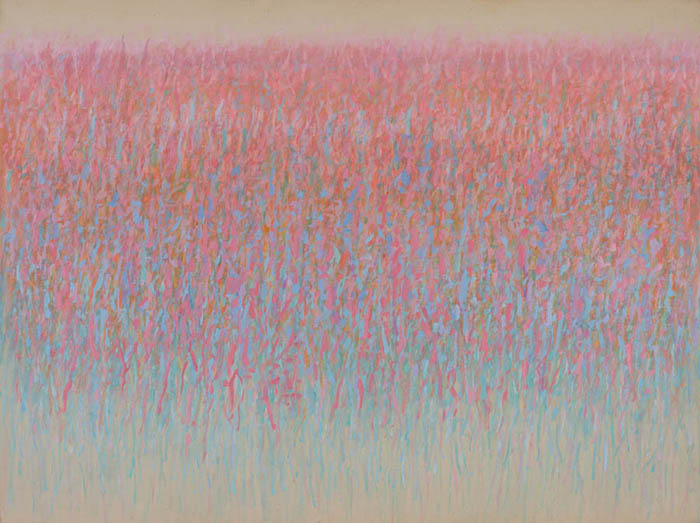 Thorpe’s work emerged as Washington Art was transitioning away from Abstraction Expression, toward the earliest establishment of the Washington Color School. As a student of American University, the influences of William Calfee, Robert Gates, and Jack Tworkov left an indelible impression on her work. However, her emergence at the Jefferson Place occurred during a time when fellow gallery artists, Kenneth Noland and Gene Davis, were introducing the gallery to their formal (and now better known) circle and stripe paintings: the beginnings of the Washington Color School.  While exposure to these new approaches to painting would certainly inform her work, so too did her explorations in sculpture—with drift wood, balsa, pipe, and off-the-shelf ducts, rolls of aluminum flashing, and painted canvas strips. Over the course of the next 40 years, her exploration between painting and sculpture would attempt to liberate an expressive gesture of color from a rectangular stretcher, and position it as an element in space. 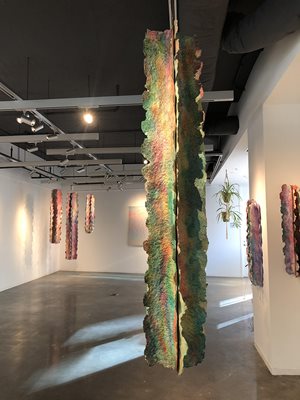 The two bodies of work within this exhibition, paintings, and paper sculptures, reflect the most immediate through-line in Thorpe’s career. Her paintings varied in both mark and structure, reflecting old guard influences from American University—abstracting from nature and through expression—as well as hints of the Washington Color School. They were modes of expression she revisited throughout her career. It would be two decades before her exploration with various media in sculpture would bring her to handmade paper, and the opportunity to bring to the sculpted form the kind of gestural expression and color she placed on the canvas. Thorpe was, as she put it, “a painter who sculpts, a sculptor who paints.” And since Thorpe’s sculpture was also inspired by her surroundings along the Potomac River in Hollin Hills, she ensured that her work was site specific when installed:

“The charge was to change the gallery space of four conventional rectilinear walls to an art space, a personal statement. To lose it and to find it again. In a new way, perhaps shrouded by mystery, and redefined. Looking at the space, viewing it with my own oeuvre in mind, I decided to fill it with forms that give light and translucency and lines. To reinterpret the nature that I am constantly experiencing and to present it in such a way that you, too, can bring your own experiencing to it.”* 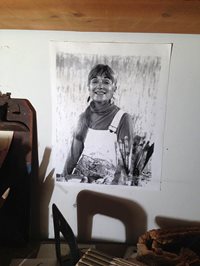 Hilda Shapiro Thorpe worked in advertising in Baltimore, prior to moving to Alexandria, VA. The mother of three began attending art classes at American University in 1955. In 1959, she was awarded a capstone exhibition at A.U.’s Watkins Gallery: a two-person exhibition she shared with Alma Thomas. The next academic year she went on to become the gallery’s director, and was encouraged by her professor, Ben Summerford to begin exhibiting at the Jefferson Place Gallery. She would go on to exhibit at The Corcoran Gallery of Art, The Baltimore Museum, The Phillips Collection, and the National Collection of Fine Arts (now the Smithsonian American Art Museum). 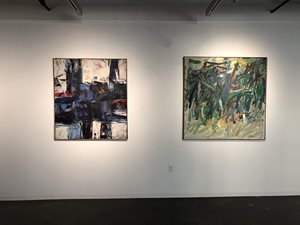 This exhibition will be the first of the series “Women of Jefferson Place Gallery”. The Jefferson Place Gallery was founded in 1957 by Alice Denney, and five art professors affiliated with American University: William Calfee, Robert Gates, Helene (McKinsey) Herzbrun, Mary Orwen, and Ben Summerford. Often credited for being the spark that ignited DC’s contemporary art scene in the 1960s and 70s, among the artists who exhibited at the gallery were Gene Davis, Kenneth Noland, Jacob Kainen, Howard Mehring, Tom Downing, Jennie Lea Knight, Rockne Krebs, Willem de Looper, and Sam Gilliam.

“Women of Jefferson Place” has been organized by Meaghan Kent, director of Cody Gallery, and John Anderson. John Anderson is an independent curator and writer. His research into the archives of Alice Denney and Jefferson Place Gallery culminated in the exhibition, “Making a Scene: The Jefferson Place Gallery” at American University Museum in 2017. A catalogue accompanied the exhibition. In addition, he has written several catalogue essays including “Seen and Unseen: Public Artworks by Sam Gilliam and Rockne Krebs,” Washington Studio School, and “Phyllis Plattner,” The American University Museum. Anderson is a contributor to Washington City Paper and re:sculpt.