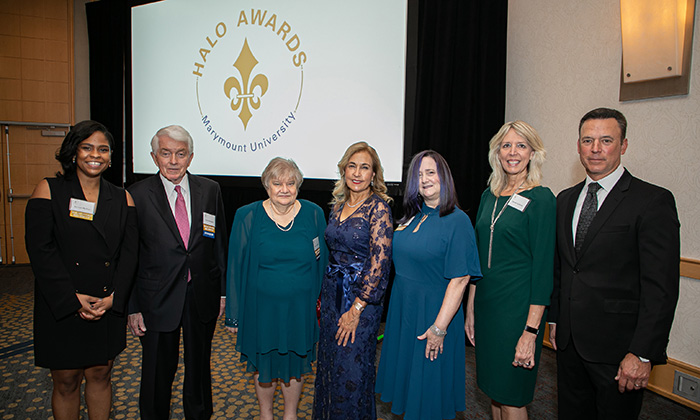 Following a year without large-scale, in-person events in 2020 due to COVID-19 pandemic-related restrictions, Marymount University marked the return of its annual Homecoming traditions this past weekend and welcomed Saints alumni and their families back to campus for several days full of events for them to enjoy during the institution’s 2021 Homecoming Weekend.

From Wednesday evening through Sunday morning, the University held a variety of special activities for Homecoming – from alumni happy hours to faculty lectures, and from open house tours to student dances.

“It was wonderful to see so many Saints alumni back on campus to celebrate their achievements and their time here at Marymount during our 2021 Homecoming,” said Dr. Irma Becerra, President of Marymount University. “We dearly missed experiencing face-to-face interactions, and being able to gather in person again for Homecoming is quite important as we ensure our graduates will remain devoted Saints for life.”

The Homecoming festivities began with the sixth annual Marymount 5K at the University’s Ballston campus. Proceeds from the race went towards providing physical therapy services to underserved populations, and allow students to travel to orphanages, nursing homes, long-term care facilities and rehabilitation clinics.

“Our students and faculty were thrilled to return to an in-person race for our annual 5K, which gives our third-year students – under the guidance of Dr. Diana Venskus and Dr. Jason Craig – the opportunity to impact the health and well-being of our global community through service and education,” said Dr. Megan Moran, Assistant Professor of Physical Therapy at Marymount University. “We had 95 in-person participants, along with another dozen or so virtual runners, making the race a great success!”

The following night, Marymount students packed the Converse Family Fieldhouse in the Lee Center to take in the action of Saints Madness, the biggest pep rally of the year as the Marymount Men’s and Women’s Basketball teams took the court for the first time in the season. It was also a night to honor the achievements of the 2001-02 Women’s Final Four team, whose banner was unveiled during the event to cheering applause from the crowd.

“Saints Madness was a great event honoring one of MU’s greatest teams while growing excitement on campus for our current teams,” said Jill McCabe, Director of Athletics and Assistant Vice President at Marymount University. “The gym was packed and full of energy.  The Final Four alums had to be thrilled with the turnout and pride our current students showed for their accomplishment!

Carson’s Marymount story is an inspirational one. After transferring to the University, she survived liver failure while playing for the Saints and returned to the court after a successful transplant. Despite being given a short life expectancy, she is alive and well today.

“For Marymount to take a chance on me with open arms, it was a wonderful experience,” Carson said. “If I could go back in time, I kid you not, I would’ve done all four years at Marymount. It’s definitely a family atmosphere there, and I would recommend Marymount to anyone who plays.”

The next morning of Homecoming Weekend, the University’s chapel in its Ballston Center was put in the spotlight, as its new stained glass windows were dedicated with a special Mass, presided over by Marymount Chaplain Rev. Gabriel Muteru.

Marymount’s 2021 Homecoming Weekend culminated with Saturday night’s inaugural Halo Awards dinner and ceremony, which recognized three alumni, one faculty member and two community members for their professional achievements and service to others. Hosted by ABC7/WJLA-TV anchor Jonathan Elias, proceeds from the event will support student scholarships and experiential learning opportunities.

Recipients of the first-ever Halo Awards during Marymount’s 2021 Homecoming include:

Tom Donohue, who received the Saint of Service Award. Donohue served as president and CEO of the U.S. Chamber of Commerce for over 20 years, and is now an advisor to the organization. He is known for building the Chamber into a lobbying and political powerhouse with expanded influence across the globe, and helping secure business victories on Capitol Hill that have revitalized capital markets, rebuilt America’s infrastructure and protected intellectual property, just to name a few. His support for Marymount has also been considerable over the years, serving on the Board for more than two decades and holding loyal major donor status for 23 years in a row.

“His experiences in the business world through the U.S. Chamber of Commerce are, of course, exceptional, and we are so grateful to have him on board as an Executive in Residence – an influential figure passing on his knowledge to the next generation of business leaders,” President Becerra said.

“I can only imagine what they have in mind for me to work on – but simply stated, this is a growing and prospering institution,” Donohue added. “Led by an extraordinary, energetic and passionate president, Marymount continues to be a university of character, strong principles and is committed to community service and to a diverse student body of undergraduate and graduate students from around the corner and around the world.”

Also receiving the Saint of Service Award was Alyson McNair, a current Marymount graduate student pursuing a MBA and a second bachelor’s degree in Fashion Merchandising. She is also the founder and president of Perfect, Inc., an organization that assists formerly incarcerated women by providing employment training, mentorship, lifestyle coaching and employment placement with fair pay and benefits. She develops training programs and oversees all volunteers and employees, as well as serves as the spokesperson and lead fundraiser.

“She goes above and beyond in all of her roles…and she is truly a good person. And at the end of the day, that’s what really matters,” said Dr. Jennifer Yang, Assistant Professor of Fashion Merchandising and Marketing at Marymount University. “Alyson has inspired me, and I hope she continues to inspire many other people.”

“My mother ran a nonprofit for 35 years. As a little girl, I used to go with her to deliver meals to the elderly and fill out forms for them because they couldn’t write or some of them couldn’t read,” McNair reflected. “She instilled in me that there was honor in helping people who were less fortunate – there was honor in serving people, regardless of what I was able to get back.”

Taking home the Distinguished Faculty Award was Dr. Diane Murphy, Director of Marymount’s School of Technology and Innovation. The award honors a faculty member who demonstrates a combination of excellence in teaching, research and service. Dr. Murphy has significantly expanded Marymount’s STEM programs by adding new learning opportunities, growing enrollment and bringing in exceptional faculty. She is also passionate about advocating for women in IT and other STEM fields, and is committed to expanded female enrollment in her programs.

“Dr. Murphy was more like a mentor to me than a professor. She was always there to assist me…and she actually made a huge impact on me when she nominated me for the Pablo Enriquez Scholarship,” explained Lucy Jacobson ’19, who studied Cybersecurity at Marymount. “She’s so deserving of this Halo Award because she is committed not only to the Marymount community but to her Marymount students, and I think that’s huge.”

“I grew up on a small island in the English Channel, the island of Guernsey,” Dr. Murphy explained. “I was the first in my family to go to college through a local authority grant, similar to the Pell Grants in this country. I know what it’s like to be different. I know what it’s like to live on a limited income in college. All of these experiences make me empathize with students here at Marymount.”

Receiving the Distinguished Alumni Award from the College of BILT was Deb Longua-Zamero ’89, an interior architectural designer who started her own design firm, DLZ INTERIORS, in Los Angeles in 2007. She was a contributing design expert for The Washington Post, and her work has been featured in design magazines and publications while receiving design, community and public service awards throughout her career. Her clients have included a sitting U.S. President, Hollywood legends and the everyday homeowner.

“When I was at Marymount, I was the student chapter president for the American Society of Interior Designers, and we were named Outstanding Student Chapter for the Mid-Atlantic region, followed by Outstanding Student Chapter for the entire United States,” Longua-Zamero said. “I was so proud to be part of something that put Marymount’s Interior Design program on the map.”

Since graduating, she has also been incredibly involved in community service through programs offering assistance to homeless men and women in Southern California, as well as for a Uganda-based social enterprise designed to uplift families out of extreme poverty.

“Not only is she an incredible and talented designer, but she’s an incredible mother and the most supportive wife a husband could ask for,” said her husband, Nathan Zamero. “While juggling so many things in her life, she always finds the time to think about and help those in need, from volunteering to take our dog to meet Alzheimer patients to building shelter for the homeless to organizing a food drive during Thanksgiving for those in need.”

Meanwhile, Marlene Malek ’79 received the Distinguished Alumni Award from the College of Health and Education. A community activist, health care advocate and patron of the arts, she is currently the Vice Chairman of Friends of Cancer Research and serves on the Board of MD Anderson Cancer Center and the Duke Cancer Institute. Malek has had an influential impact on Marymount – she’s served on the University’s Board of Trustees since 1984, and the Malek School of Nursing Professions is named in honor of Marlene and her husband, Fred, for their service and commitment to Marymount.

“She wants the time she spends on board service to make a difference in accomplishing the organization’s mission, so she volunteers to serve where the need is the greatest and many times this finds her on the executive committee as well,” said Marcia Carlucci, friend of Marlene Malek. “Serving in this capacity demands teamwork, time and attention, and especially accountability. I can’t think of a more deserving person to receive this Distinguished Alumni Award, and I salute Marymount for honoring her.”

“Back when I was first married, I lost my father to cancer. And then, when I was a young mother, I lost three friends to cancer all in the same year. My mother-in-law also passed from the disease when my children were little,” Malek reflected. “So over time, seeing more and more devastation from cancer in my own life and in the lives of others – that was a major reason that I decided to attend nursing school at Marymount. Without that decision, I wouldn’t be where I am now, where I’m able to live out my passion for helping others every day.”

The remaining honor, the Distinguished Alumni Award from the College of Sciences and Humanities, was awarded posthumously to Missy Wagler ’07. Sadly, she passed away in August, leaving behind a loving family and mourning friends and colleagues, but she was still honored and remembered during the Halo Awards ceremony.

Wagler, a Unit Chief with the FBI’s Cyber Division, held over 14 years of total FBI experience. She served as the FBI intelligence team’s strategic lead in a multi-agency effort to understand and mitigate a foreign cyber threat, and helped shield the American public despite COVID-19 restrictions and hurdles. While working to protect Americans from criminals worldwide, she still went above and beyond by volunteering at CrisisLink and her church, and was also on the PTA at her children’s school.

“In honor of Missy, Marymount is proud to announce a Halo Scholarship Fund in her name, which will be awarded to students who display an extraordinary commitment to community service – just like Missy did,” President Becerra said. “Missy will forever live on in our hearts.”