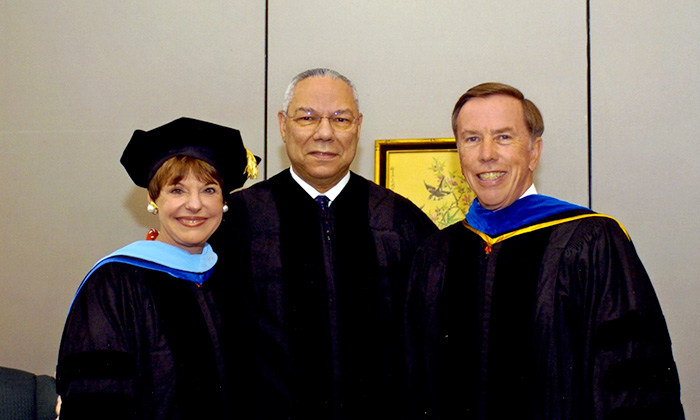 Gen. Colin Powell, the first Black U.S. Secretary of State and former Chairman of the Joint Chiefs of Staff, passed away on Monday at the age of 84 due to complications from COVID-19. While he was fully vaccinated, he was immunocompromised due to multiple myeloma and Parkinson’s disease.

Over the course of the week, there’s been an outpouring of condolences for the distinguished leader who served through numerous presidential administrations after a groundbreaking career as a professional soldiers for 35 years.

“My late husband and I have known Colin Powel and his wife Alma for many years and considered ourselves close friends,” explained Marlene Malek, trustee at Marymount University. “Colin was bigger than life and much loved by all who knew him. He was a true friend, devoted to his family, a gentleman full of integrity and the most honorable man I know. We will miss him terribly.”

Marymount University was honored to host Gen. Powell as the keynote speaker at the institution’s 55th annual undergraduate commencement ceremony in 2006, when he received an honorary Doctor of Humane Letters degree in recognition of his career of service to the nation and the world. Click here to watch his commencement speech.

“Our nation has lost a great leader, one who personified our motto of ‘Learn with Purpose’ and ‘Live with Purpose,’” said Dr. Irma Becerra, current President of Marymount University.

“What I remember most is that General Powell shook hands with every graduate crossing the stage, and received hugs from a number of them,” reflected Dr. James Bundschuh, President Emeritus of Marymount University, serving in office from 2001 to 2011. “In the years following the graduation ceremony, I would run into him from time to time at various events. He always addressed me as ‘Mr. President,’ and of course, I called him ‘General.’ He was a man of the highest integrity and was respected by everyone.”

Delivering his address at D.A.R. Constitution Hall in Washington, D.C., Gen. Powell spoke about U.S. foreign policy and offered advice for success to Marymount graduates, based upon how his entire career followed his life’s passion of soldiering.

“Some of you in the graduating class may know now already what it is you want to do with the rest of your life. You may know now what you love doing and what you do well, and you’re prepared to commit yourselves to it,” Gen. Powell said. “But many of you may not know yet – you may still be looking. And you may go down several false trails along the way. But never stop looking until you find that one thing which you love doing and which you do well. You just can’t tell where the future will take you, but it will take you somewhere.”

In his speech, Gen. Powell also emphasized the importance of service to others – one of Marymount’s three core values. Referencing the University’s extensive community service programs and activities that allow Saints to serve both near and far, he reminded graduates to never forget that virtue as they carry on into adulthood.

“Service to others is a hallmark of a Marymount education, and we aim to instill that value in all of our students. I feel that his whole life serves as an example of that dedication, and he was a blessing to our country and all those who knew him,” said Lita Treacy ’60, member of Marymount University’s Board of Trustees. “We all have wonderful memories of General Powell addressing our graduating class of 2006, which was so fortunate to have had such a distinguished speaker. It is a memory I am sure they will never forget.”

Before leaving the stage, Gen. Powell spoke about his family’s roots in Jamaica and his parents’ immigration to the U.S. before he was born. As the child of immigrants, he continuously opposed anti-immigrant rhetoric during his career and was a vocal supporter of the Dream Act – legislation that would pave the way for Dreamers in the U.S. to receive permanent residency.

Marymount University shares these values in support of its Dreamer students, partnering with TheDream.US to enroll undocumented scholars on campus and encouraging the passage of legislation that makes Virginia students eligible for state financial aid if they are eligible for in-state tuition, regardless of citizenship or immigration status. House Bill 2123 and Senate Bill 1387 were signed into law on Marymount’s campus by Governor Northam in June 2021.

“As we go through this debate, let us never forget how important immigration is to our future success. Let us never forget that the diversity that is the richness of America is a source of our strength, not the source of our weakness,” Gen. Powell said. “We must remain open, welcoming – a place that greets all who come to these shores.”

In addition to his military and government roles, Gen. Powell served as founding chairman of America’s Promise Alliance, an organization dedicated to strengthening the character and competence of America’s youth and ensuring that every child in America “has the fundamental resources he or she needs to be ready for the future.”