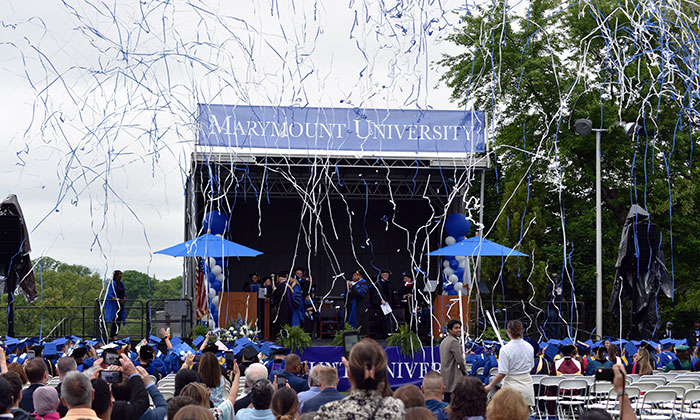 Continuing a new tradition that began last year, Marymount University held its 71st annual commencement ceremonies this past weekend outside on the Converse Family Field at the institution’s Main Campus in Arlington.

Celebrating the Class of 2022, commencement ceremonies were held from May 13-15 for students who qualified for graduation from the Fall 2021, Spring 2022 and Summer 2022 semesters, as well as students who graduated in Summer 2021 but were not eligible to participate in last year’s ceremonies. An estimated total of 1,080 students received their degrees at events organized by College.

The first ceremony was held on Friday for the College of Health and Education, with 370 degrees conferred to students studying Nursing, Health Sciences, Counseling and Education. Dr. Irma Becerra, President of Marymount University, congratulated the institution’s newest alumni and told them how they will be leaving campus at an unprecedented time in world history in regards to the COVID-19 pandemic, domestic threats to democracy and Russia’s invasion of Ukraine.

“Here in the U.S., we have always had freedom and we might sometimes take it for granted. But now, we are seeing how Ukrainians are willing to give up their lives in defense of their homeland and their hard-earned freedoms,” Dr. Becerra explained. “Freedom of speech, freedom of religion, freedom to petition – not everyone in the world is lucky enough to have access to these fundamental rights. But we do – and as graduates of Marymount University, you have received a values-based education here that will allow you to go out into the world as compassionate leaders and protectors of freedom in whatever field you choose.”

During his welcoming remarks to graduates, Marymount University Provost and Senior Vice President of Academic Affairs Dr. Hesham El-Rewini shared a piece of advice that he often relates to his own children, calling it the ‘cup metaphor.’

“On the path to your degree, you have all been through a lot – good and bad, easy and difficult. Just as a glass is filled more and more as you pour water into it, your personality and your mind are filled incrementally with each experience you have, no matter how insignificant it may seem at the time,” Dr. El-Rewini said. “As we all know, if you keep pouring water into a cup, it will eventually overflow. Similarly, the experiences we have keep building and adding to each other until we find clarity in our path and our purpose.”

Serving as guest speaker for the College of Health and Education ceremony was Princess Reema bint Bandar bin Sultan bin Abdulaziz Al Saud, the first woman in the history of Saudi Arabia to serve as Ambassador to the U.S. In her position, she has been a prominent figure in advocating for increased gender equity and women’s empowerment in her home country. She recalled her journey to graduating Saints as she emphasized the importance of pursuing multiple interests and taking advantage of opportunities when they present themselves.

“I grew up not far from here, seven minutes, when my father served as Ambassador in Washington, D.C., for 23 years. I lived in a home that was surrounded by diplomacy and by politics, and yet I pursued a different path in my career and my studies,” Princess Reema said. “I started a women’s gym in the Kingdom. I’m a mother of two, I ran a retail company and I was thriving. But I learned the power of financial literacy for women, and I recognized the women in my country needed the tools of self-sufficiency.”

On Saturday, 257 students received degrees during the Commencement ceremony for the College of Sciences and Humanities, consisting of Saints who studied majors in the humanities, science, mathematics and engineering and social and behavioral sciences. Inspiring these graduates was guest speaker Dr. Julian Earls, former Director of NASA’s Glenn Research Center at Lewis Field in Cleveland. Responsible for planning, organizing and directing the Center’s missions, he has also been widely known over the years as a trailblazer for diversity, and is actively involved in assisting the next generation of Black students in the STEM fields.

“I was one of 11 children and my parents were not formally educated, but they were among the smartest people I’ve ever met,” Dr. Earls reflected. “My mother used to say to me, ‘boy, you should get enough education so you never have to look up to anybody. And then, get a little bit more so you’ll be wise enough not to look down on anybody, either. My daddy used to say, ‘education without common sense is like a load of books on the back of jackass. Boy, you make sure you get both.’ And you graduates – you’ve been blessed that you have drained Marymount University of a little more of that knowledge and that common sense. You are leaving here with both, and you have every right to be proud of that.”

The third and final Commencement ceremony of the weekend was for the College of Business, Innovation, Leadership and Technology (BILT), as 453 undergraduate, master’s and doctoral students earned degrees on Sunday in fields such as business, design, art and technology. David Rubenstein, the renowned businessman and philanthropist who co-founded one of the world’s largest and most successful private investment firms in The Carlyle Group, gave these new graduates his words of wisdom as the invited guest speaker for the ceremony.

“I experimented with my career many times – you have to take chances. I didn’t start Carlyle until I was 37 years old. I tried many different things and I failed at many different things, but I kept trying and experimenting,” Rubenstein explained. “You don’t know exactly what you’re going to do with your life until you find something you love doing – you can’t really be successful in life if you hate what you’re doing. Nobody won a Nobel Prize hating what they’re doing. You have to love what you’re doing – so find opportunities and keep changing jobs until you find something you love.”

To watch livestreams of each of the three Class of 2022 commencement ceremonies, click here.