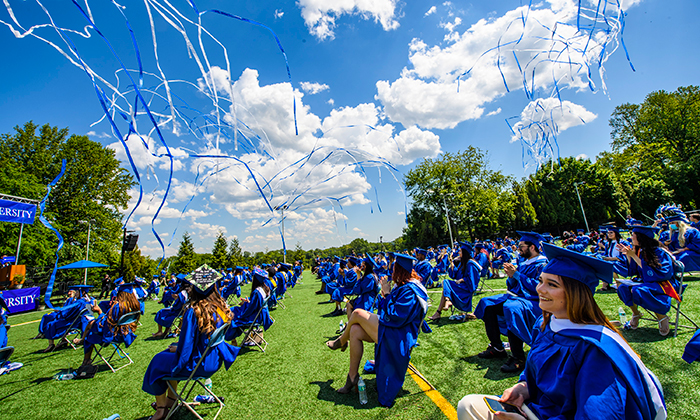 *An earlier version of this story included statistics on the number of students who attended commencement ceremonies, rather than the number of total degrees awarded. These references have been updated.

After virtual ceremonies were held last year due to the COVID-19 pandemic, Marymount University was proud to once again offer in-person, outdoor commencement ceremonies for 2021 graduates this year while also celebrating members of the Class of 2020 as well.

From May 14-16, the University’s commencement ceremonies took place on the Converse Family Field on Main Campus, and included students who qualified for graduation from the Fall 2020, Spring 2021 and Summer 2021 semesters. For the first time, these ceremonies were organized by College, with undergraduate and graduate students included together, and doctoral students where appropriate.

Kicking off Commencement Weekend was the Ceremony for the College of Health and Education, which took place Friday morning. Degrees were conferred to students in the fields of Nursing, Health Sciences, Counseling and Education.

In her speeches to graduates, Marymount University President Irma Becerra described how members of the Class of 2021 have demonstrated their ability to be “antifragile,” a term coined by author Nassim Taleb.

“It would have been hard enough to simply reach this point by getting to commencement, but you did this under incredible stress and shock due to the COVID-19 pandemic. And as a result, you emerged more successful and stronger than ever,” she explained. “Not only were you robust and resilient during this pandemic, but you thrived and graduated. The difficulties you overcame this year made you stronger.”

Marymount University Provost Hesham El-Rewini echoed those sentiments in his remarks, as he encouraged graduating Saints to reflect on their future roles in society and how they can make a difference in their desired career field.

“This graduation ceremony comes at a time when we are beginning to see light at the end of the tunnel, after facing unprecedented challenges during the past 14 months,” he said. “The fact that we are here together – in person, happy and celebrating your success should give us all hope that tomorrow will be better, brighter and full of possibilities.”

Addressing the College of Health and Education graduates as featured guest speaker and honorary degree recipient was James Dyke, Jr., Senior Advisor of State Government Relations at McGuireWoods Consulting and Marymount University trustee. He has been a prominent figure in politics for over 30 years, previously serving as Virginia’s Secretary of Education under Gov. Douglas Wilder and domestic policy advisor to former Vice President Walter Mondale.

Stressing his personal commitment to education, Dyke shared how his grandfather taught in a one-room segregated school for four decades, while his mother and many aunts and cousins were also lifelong teachers.

“I was raised with the certainty that education is the key to realizing dreams, even in an America of inequality, inequity and intolerance,” he explained. “It is through education that we understand the world in which we live and are better capable of overcoming obstacles. I would not be standing here today but for the talent, dedication and inspiration of my teachers who gave fully of themselves to assure that this Black student received an excellent education, most notably while attending segregated schools – an education that enabled me to realize my dreams against all odds.”

The following day, Saints received degrees during the Commencement for the College of Sciences and Humanities, which celebrated students in the fields of humanities, natural sciences and mathematics and social and behavioral sciences. Entrepreneur and philanthropist Sheila Johnson served as guest speaker and honorary degree recipient. Well-known for co-founding Black Entertainment Television (BET) and becoming the first African-American woman to attain a net worth of $1 billion, Johnson is the Founder and CEO of Salamander Hotels & Resorts and the Vice Chairman of Monumental Sports & Entertainment. She is also the only African-American woman to have ownership in three professional sports teams – the NBA’s Wizards, NHL’s Capitals and WNBA’s Mystics.

In her remarks, she told Saints that the obstacles and challenges they have faced because of the COVID-19 pandemic will benefit them as they enter the workforce.

“The generations that came before you never fully knew what it’s like to go to school virtually, to learn virtually, to interact with your teachers and classmates virtually and to try to virtually experience one of the most mind-altering and eye-opening times of anyone’s life – but you do,” Johnson told Marymount graduates. “Believe it or not, that’s now a huge competitive advantage for you. Because like it or not, much of what you just experienced this year and what you now know…the rest of us are still scrambling to learn.”

The final Class of 2021 ceremony on Sunday morning honored the graduates of the College of Business, Innovation, Leadership and Technology (BILT), who heard from guest speaker Donald Graham. The business leader previously received an honorary degree from Marymount when he was a commencement speaker in 1990 – this time around, he was presented with the Mother Gerard Phelan Gold Medal, which is awarded for achievements of an exemplary nature. Past recipients have included First Lady Nancy Reagan, Baroness Maria von Trapp and others.

The Chairman of the Board for Graham Holdings Company and former publisher of The Washington Post, Graham’s extensive experiences include serving on Facebook’s Board of Directors and as trustee of the Federal City Council and Gates Policy Initiative. He also co-founded both the District of Columbia College Access Program and TheDream.US, the nation’s largest college access and success program for DREAMers. Marymount is one of the program’s founding partner colleges.

In Graham’s speech to the Class of 2021, he encouraged graduates to move forward in their careers at their own pace and to not be discouraged by negative predictions about the future.

“I’ve read a lot about challenges your generation is supposed to face – you will be the first generation in American history to not do better than your parents, and so on. Do not believe a word of those predictions. The people doing the predicting almost certainly do not know what they are talking about,” Graham said. “I graduated from college in 1966 – was anyone at my college or anywhere predicting that by now, China would be the leading rising economic power in the world? They were not.”

“I promise you, the world will change in unpredictable ways in your lifetime. Do not start out believing the pessimists. Making things change starts with believing they can change.”

In addition to the three commencement ceremonies for the Class of 2021, Marymount University also held a separate event on Saturday afternoon, “A Celebration for the Academic Year: 2019-2020 Graduates,” in the Lee Center on campus. This gave Marymount graduates from one year ago a special opportunity to still celebrate their academic achievement in an in-person format.

“It doesn’t seem that long ago, in my commencement address to you last year, when I described how the still-unfolding coronavirus pandemic may be one of the most impactful events in the 21st century. You, of course, experienced that firsthand – as due to restrictions at the time, we had to pivot to a virtual commencement ceremony last May,” President Becerra said. “We know that format was not the preferred type of celebration, and that’s why we made it a priority to hold an in-person event for our 2020 graduates as soon as we were able. Saints, this will always be your home.”

To watch livestreams of each of the three Class of 2021 commencement ceremonies, visit the Marymount University Facebook page.