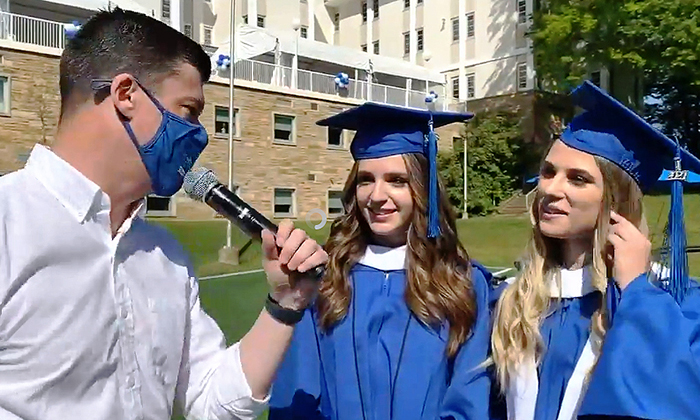 It is said there is no rest for the wicked. Turns out there isn’t much, either, for the saints – Marymount University Saints, that is.

Mario Wilson on May 15 received a master of arts degree in forensic and legal psychology during one of three Marymount commencement ceremonies held over the weekend, and was already preparing to begin a job with the International Association of Police Chiefs.

“I start on Monday,” he said, with the goal of “shaping the future of law enforcement.”

Like institutions of higher education everywhere, Marymount’s last year has been disrupted by the pandemic. The commencement ceremonies were an indication both of progress that had been made, and challenges that remained.

Traditionally held at D.A.R. Constitution Hall (with one ceremony for undergraduates and another for graduates), this year’s events were moved to the outdoor Converse Family Sports Complex on the university’s main campus in Arlington. Perhaps not ideal, but most would agree a significant improvement from the prospect of a Zoom commencement.

Because both of the small size of the venue and social-distancing requirements still in force, the ceremonies were limited to graduates, faculty and speakers. Families and other invitees of the graduates were nearby, however, watching the proceedings livestreamed to the university’s Lee Center.

Graduates at the May 15 ceremony listened as entrepreneur and philanthropist Sheila Johnson Newman reminded them that despite the challenges of “a year of living cautiously,” the pandemic made them stronger – and, coincidentally, more marketable.

Johnson told the graduates that previous generations of Americans, too, had their crosses to bear. She pointed to young people of the 1917-18 period, who were sent off to war and had to deal with a worldwide pandemic even more devastating than the current one. And then there were those of the 1930s and early 1940s, who lived through the Depression only to find themselves dispatched to another war in a struggle against tyranny.

“Those kids were your age,” she told students. “Like you, their days of innocence had been forever changed.”

As with Johnson, Marymount president Irma Becerra told students they have been made stronger and more resilient by recent events.

“You’ll be ready for whatever life throws at you,” she said, calling the Class of 2021 the “anti-fragile” brigade – a group that does not simply roll with the punches, but is prepared to benefit from future shocks and stresses and faces up to adventure and adversity.

“Your new journey begins today,” Becerra said, reminding students that “skills are nothing without values.”

The university’s provost, Hesham El-Rewini, urged graduates to “stop, reflect and think of your role in society.”

“Tomorrow will be better, brighter and full of possibilities,” he said. “Make this planet a better place for all of us.”

Almost lost in the chaos of the year was the fact that the 2021 commencement was the university’s 70th. Marymount was founded by the Religious of the Sacred Heart of Mary order of Roman Catholic nuns in 1950, beginning as a two-year women’s college and evolving into a co-educational university granting degrees up to the doctoral level.

The pandemic’s impact forced Marymount to shift to online education in the spring of 2020, but it rebounded with a hybrid format for the current academic year and aims to come back fully in-person, with all students and staff vaccinated, in the fall.

To honor members of the Class of 2020 who saw their own graduations lost in the pandemic pandemonium of last spring and summer, Marymount on May 15 celebrated their achievements with an event at the Lee Center.