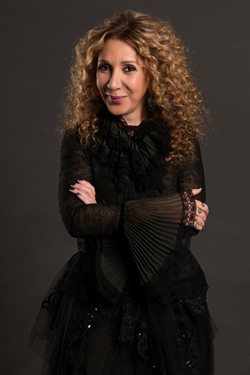 While attending the American University of Beirut, Acra was discovered by a fashion editor who was captivated by a lavishly embroidered silk organza gown Acra wore to a party – made from her mother’s dining room tablecloth. The editor instantly offered to host a fashion show for Acra that took place 10 days later.  She went on to study at the Fashion Institute of Technology in New York and its Paris counterpart École supérieure des arts et techniques de la mode (ESMOD).

After a short stint as an interior designer, she returned to her fashion roots while working in Hong Kong and New York. A friend wore Acra’s first bridal design to her society wedding, sparking international interest for the designer, and Reem Acra Bridal was born.

In 1997, Acra launched her fashion business with a bridal collection that quickly became recognized for its elegance and impeccable designs. The success led to the introduction of the Reem Acra prêt-a-porter collection six years later. Similar to its bridal counterpart, the collection features meticulously constructed designs ranging from understated chic to ornate.  It is distinctly modern but marked by rich color, lush fabrics, playful patterns and flawless construction.

Her collections are carried by some of the world’s most exclusive retailers, including Bergdorf Goodman, Neiman Marcus, Saks Fifth Avenue and Harvey Nichols. Acra is a member of the Council of Fashion Designers of America and serves on the Board of the Dubai Design and Fashion Council.