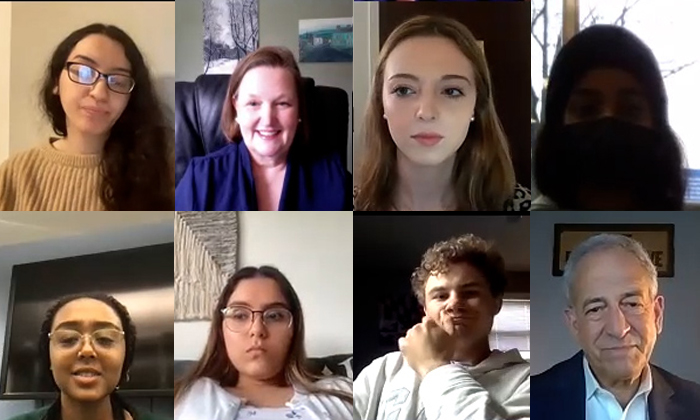 During a historic moment as the United States Senate considers the nomination of Judge Ketanji Brown Jackson to the Supreme Court, Marymount University student journalists are getting the full scope of the moment’s significance directly from a former Senator who played a key role in judicial nominations during his time in office.

Feingold was elected as a U.S. Senator from Wisconsin in 1993 and held the position through 2011. During his time in Congress, he served on the Judiciary, Foreign Relations, Budget and Intelligence Committees, and was Chairman of the Constitution Subcommittee. After leaving the Senate, Feingold has served as President of the American Constitution Society, a network of progressive lawyers, law students, judges and scholars.

On March 23, student journalists not only got to meet Feingold but also had the chance to interview him for stories they would draft about Jackson’s nomination process.

“It’s a great honor for former Sen. Russ Feingold to offer a real-world press conference opportunity to Marymount students, especially during the week when the testimony of a U.S. Supreme Court nominee began,” Murphy explained. “It doesn’t get more real than that, and the experience will help students walk into a newsroom with confidence they can do the job.”

Feingold spoke frankly on the importance of the Supreme Court and how recent events – such as the handling of former President Barack Obama’s Supreme Court nominee Merrick Garland in 2016 – have shaken the appointment process of the nation’s third branch of government and its political leanings.

“The Republican-led Senate refused to even let [Garland] be considered. It was the longest time in American history that a justice had not been considered,” Feingold said during the press conference exercise.

Feingold has praised the Biden-Harris Administration for nominating 73 federal judges in 2021, a majority of whom are women and people of color. He shared his thoughts in a January 2022 article in The Progressive Magazine, which student Avril Aguero cited when asking him what the biggest impact on society this effort will make.

Student Sebastian Radovic moved the conversation towards the role of leadership, and what the former senator believes Marymount students should know to become effective leaders in future careers.

Feingold joked that he could give a lengthy lecture on the subject of leadership, but opted for a more concise response.

“I think you should not go into politics or try to become a leader unless you feel you have some basic ethical beliefs you feel you can stick to,” Feingold said. “The way I always portrayed it as a politician was, what were you willing to give up your position or office for? Something you really believe in.”

In addition to Feingold, the class has heard from a roster of distinguished speakers this semester, including:

Students also learned about “Solutions Journalism” from Marymount’s Dr. Kimberly Meltzer, Director of the School of Social and Behavioral Sciences.