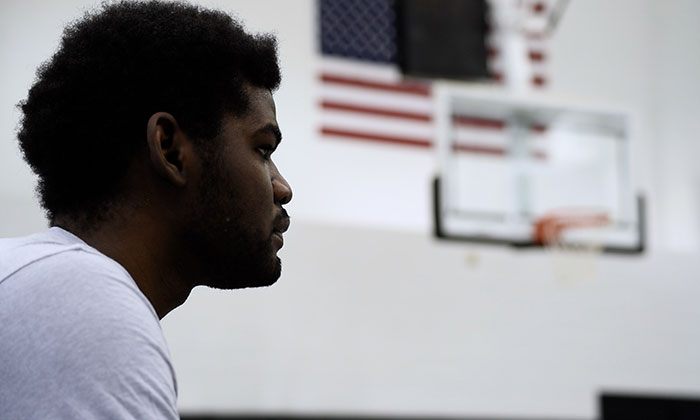 In 2013, Marymount University wellness case manager Yilret Yiljep was on top of the world. He had traveled far from his home country of Nigeria to chase his dream of becoming a college basketball player, and was now fulfilling those aspirations at the Division I level with American University.

But the onset of frightening symptoms brought his world crashing down.

“Midway through my freshman season, I started experiencing symptoms of heart problems – I had chest palpitations, shortness of breath, tightness around my chest,” Yiljep said. “I was later diagnosed with a medical condition called cardiomyopathy, and basically I was told that I couldn’t play basketball anymore.”

For the next four years, he felt more like an honorary team member – attending every practice, participating in all team meals, but unable to play in games. The overall experience of losing what he loved most led to an identity crisis, as everything he had been working towards ended far too soon.

“I started questioning everything. I was trying to figure out who I was without basketball, and that was really hard for me.”

But Yiljep got a second chance. After experiencing similar heart-related symptoms in 2017, he checked into a hospital and discovered that his supposed rare condition was actually a misdiagnosis.

“I was told that I never really had a heart condition, that I just had anxiety and panic attacks,” Yiljep explained. “We figured out that I would be able to live a normal life again, and I was eventually able to come back and play basketball as a graduate student. Those last two years were amazing, and it was so great to be out there competing again.”

Following his last two seasons of college basketball and obtaining bachelor’s and master’s degrees, Yiljep decided to dedicate his career to helping future generations of college students who are going through similar bouts with adversity.

“I wanted to work in higher education because, just going through college, I had so many issues I had to work through. I knew that moving forward, I wanted to be in a position where I could impact the lives of students in a campus setting.”

As case manager for Marymount University’s Office of Wellness, Prevention and Education, Yiljep oversees a team of 10 staff and faculty members who provide care for students and connect them to resources on campus and in the greater Arlington community. Services offered include peer-led workshops, health education consultations, food security initiatives and more.

“Students go through so much, especially right now with COVID, so we try to connect students to as many resources as possible,” he said. “It’s more than just helping students through situations that arise during their time at Marymount. We want to leave a lasting impact through lifestyle changes, cultivating healthy habits and helping them continue those as they go through life. That’s the biggest thing.”