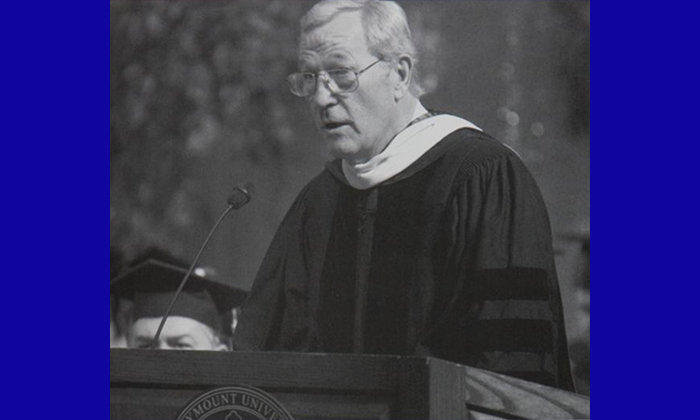 Roger Mudd, the veteran political correspondent and television news anchor, passed away on March 9, 2021 at the age of 93, according to news reports. Mudd is remembered as a titan of journalism after more than 30 years in network television, delivering news to homes across the country. He also had a strong relationship with Marymount University, where over the years he served as a commencement speaker and was a featured lecturer.

During his career at CBS and NBC News, Mudd reported on the United States Congress, presidential elections and political conventions. One of his most memorable moments came during a one-hour special with presidential hopeful, Senator Edward Kennedy, who was attempting to challenge President Jimmy Carter for the 1980 Democratic presidential nomination. During the interview, Mudd asked Kennedy a simple question: “Why do you want to be president?”

Kennedy fumbled through his answer, unable to give a specific reason. Carter went on to receive the nomination and Kennedy never ran for the presidency again.

Mudd carried on a celebrated career at CBS for more than two decades before moving into positions at NBC, PBS and the History Channel. In addition to other notable achievements, Mudd received a Peabody Award for the 1970 CBS documentary The Selling of the Pentagon.  In 2008, he released a memoir about his time reporting on politics, called The Place To Be.

Marymount is honored to have hosted Mudd and the Virginia Foundation for Independent Colleges (VFIC) Ethics Bowl in 2015. The Ethics Bowl is an opportunity for students at the 15 VFIC institutions to engage in lively debate and consideration of applied ethics. Brian Doyle, Professor of Theology at Marymount and the former University team coordinator, recalls the two-day event and Mudd’s eagerness to meet all of the University’s student participants.

“Roger’s kindness and welcoming spirit was infectious and consistent,” Doyle said. “But he did not tolerate those that would not ask critical questions, or thought all of ethics as relative. He was clear there was always a need for ethical reflection and action.”

Mudd’s influence as an ethical thinker and orator captured the University’s attention, and Marymount was pleased to honor Mudd as the first speaker in the Marya McLaughlin Endowed Lectureship in Media Communications. The lecture honors the late Marya McLaughlin, who was a well-known CBS News radio and television correspondent. The lecture provides students, faculty and the public with insights and inspiration from journalists of national stature.

The University further recognized Mudd’s achievements when calling upon him to deliver the commencement address during the 2003 graduation ceremony. Mudd spoke before a crowd of more than 800 graduates. During the ceremony, Mudd was given an honorary degree from the University.

Our campus community joins in recognizing the incredible influence of Mudd’s career and his outstanding achievements as an inspiration for all students, staff and faculty.