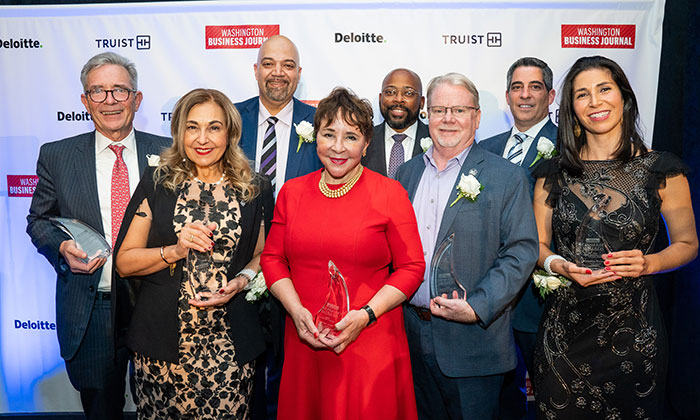 As a values-driven institution, Marymount University has always been deeply committed to fostering diversity and social justice. This week, campus-wide initiatives and efforts from leadership were placed in the spotlight by the Washington Business Journal, as Marymount President Irma Becerra was honored with the media outlet’s Diversity, Equity and Inclusion (DEI) Champion Award for 2022.

Marymount’s seventh president received the Award at Thursday evening’s CEO of the Year Awards Celebration, held at the Four Seasons in Washington.

“The past few years of the pandemic and protests against racial injustice have been a turning point for so many communities and organizations,” explained Alex Orfinger, publisher of the Washington Business Journal. “President Becerra’s work in expanding access to affordable education and financial assistance for students, particularly immigrants and those of color, at Marymount and earning it a Hispanic-Serving Institution designation has helped change the paradigm for so many students, immigrants and future workers in Washington.”

“If you google DEI, up should pop a picture of Marymount University President Irma Becerra,” said James Dyke, member of Marymount’s Board of Trustees. “She has demonstrated remarkable leadership on issues related to creating an inclusive environment at Marymount.”

During President Becerra’s tenure at Marymount, the University has distinguished itself by becoming the Commonwealth of Virginia’s first and only Hispanic-Serving Institution (HSI), with more than one-quarter of its undergraduate student population identifying as Hispanic. In the recent Best Colleges Rankings from U.S. News & World Report, the first time that Marymount was classified as a Best National University, the institution ranked No. 23 in the nation for campus ethnic diversity and No. 20 for international students. This unique campus environment sets Marymount apart in the region, as it is the most diverse private institution in Virginia, and more diverse than any other college or university in Washington, D.C.

President Becerra’s work in advocating for Dreamer students at Marymount and across the nation also led to her DEI Champion Award honor. In recent years, she has lobbied on Capitol Hill for a permanent legislative solution to DACA that would provide a pathway to citizenship for Dreamers. At Marymount, she was instrumental in establishing the University’s partnership with TheDream.US, the nation’s largest college access and success program for Dreamers, and she also created the institution’s own Dreamers scholarship fund. In addition, the University hosted former Virginia Governor Ralph Northam on campus as he signed a bill that made Virginia students eligible for state financial aid if they are eligible for in-state tuition, regardless of citizenship or immigration status.

“I do all of this because for me, it’s personal,” President Becerra explained during her award acceptance speech. “I am a Cuban-born immigrant, and when I was eight months old, my family was forced to leave Cuba with nothing. Luckily, we were granted citizenship as political refugees, which meant I could receive Pell Grants, federal loans and work study during my college years.”

“Unfortunately, today’s Dreamers, many of whom escaped from violence in their home countries just like I did, can’t take advantage of those opportunities. Every day, I fight to give them the same chance that I received – to get a life-changing education.”

The last few years at Marymount have also featured the introduction of several impactful DEI practices for students, faculty and staff. These include the opening of the Diversity, Equity and Inclusion Center in Rowley Hall and the launch of the Truth, Racial Healing & Transformation Campus Center, as well as new academic opportunities that focus on involving underrepresented students – such as the Dr. Mark Abbruzzese Bridge Scholars Program in Nursing and virtual tech boot camps offered in partnership with Netflix and 2U.

“In these days of really deep polarization in our country, I think for Marymount, we see diversity as a source of strength,” President Becerra said in an interview with the Washington Business Journal’s Hannah Denham when asked what she wants Marymount students to come away with for their world view on equity. “We have not had clashes of perspective here, I think, because we are so diverse to begin with, that we’ve created an environment that is supportive of diversity, including diversity of thought.”