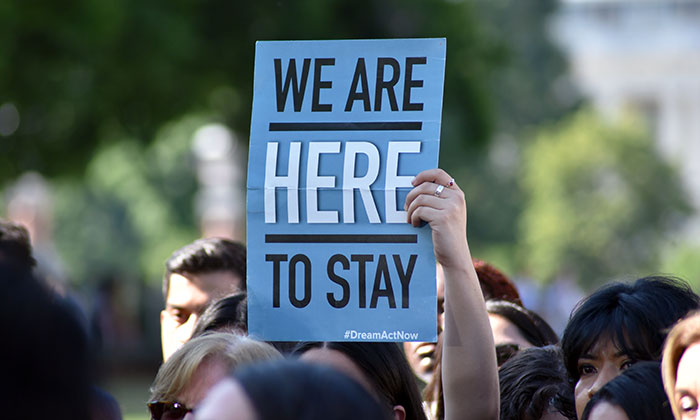 Yesterday on Capitol Hill, #WithDACA – a coalition of the American Business Immigration Coalition (ABIC), Coalition for Humane Immigrant Rights (CHIRLA), TheDream.US, FWD.us, National Immigration Law Center (NILC), Pre-Health Dreamers, Presidents’ Alliance on Higher Education and Immigration and United We Dream – marked the 10th anniversary of the Deferred Action for Childhood Arrivals (DACA) program. Together, they demanded that Congress pass a path to citizenship for America’s Dreamers – those who came to the U.S. as children – whether or not they qualify for DACA.

Marymount President Dr. Irma Becerra, joined by two Marymount students who are Dreamers themselves in Andrea Anaya-Sandoval and Karla Mercado Dorado, represented the University’s steadfast support for this vulnerable population.

“DACA has been a lifeline for tens of thousands of Dreamers across the country, but it’s under constant threat and is used as a political football from administration to administration – while the lives of so many young people hang in the balance,” President Becerra explained. “These young people are American in every way and are making our nation stronger, boosting our economy by contributing their skills and talents in fields like nursing, business, IT and criminal justice. However, they face great difficulty in putting themselves through college because they can’t receive federal financial aid. We cannot afford to turn our backs on our Dreamers who give America their best.”

During the press conference, President Becerra also introduced U.S. Rep. Maria Elvira Salazar (R-FL). The two come from similar backgrounds, with President Becerra escaping the Cuban revolution with her family at just eight months old and Rep. Salazar being the daughter of Cuban exiles. Together, they are both staunch supporters for Dreamers.

“I represent a district in South Florida that is probably the ultimate melting pot in the U.S. I believe Dreamers are Americans – there’s no other way to put it. They go to school, pay taxes and serve in the military,” Rep. Salazar said. “There are 5,100 Dreamers in my district who contribute more than $1 million each year to our economy. They make my city and our country better.”

The success of the DACA program has unleashed the economic potential of almost 800,000 people, allowing them to contribute to our economy, start families, buy homes, access health care, build businesses and bring their talents to the industry sectors where they’re most needed.

But for too long, DACA participants have been vulnerable to government indecision, sowing anxiety, instability and legal limbo in their lives. And, DACA’s strict timeframes omit thousands of individuals who need it. More than 427,000 undocumented students are currently enrolled in postsecondary institutions, and of these, less than half are DACA-eligible. Similarly, every year, nearly 100,000 undocumented students graduate from U.S. high schools but only one-quarter are DACA-eligible.

Over recent years, Marymount has emerged as a beacon of support for Dreamers. The first and only Hispanic-Serving Institution in Virginia, the University is also a founding partner of TheDream.US, the nation’s largest college access and success program for Dreamers. It has established its own Dreamers scholarship fund. And last year, the University hosted former Virginia Gov. Ralph Northam for a ceremonial bill signing that made Virginia students eligible for state financial aid if they are eligible for in-state tuition, regardless of citizenship or immigration status.