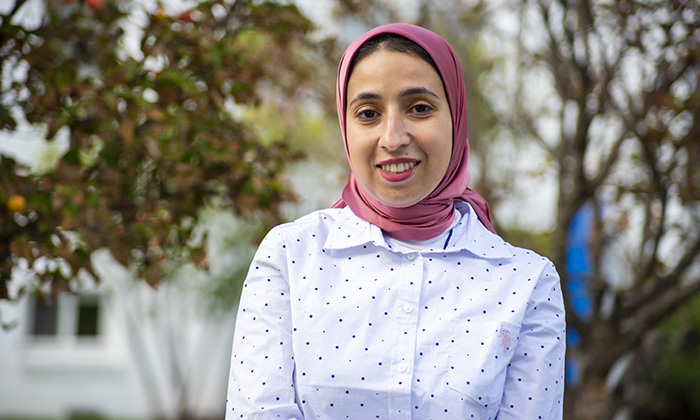 For the first time, Marymount University’s Center for Global Engagement (CGE) is welcoming a Fulbright Foreign Language Teaching Assistant (FLTA) to campus during the 2021-22 academic year. Sponsored by the U.S. Dept. of State Bureau of Educational and Cultural Affairs, the Fulbright FLTA Program is designed to develop Americans’ knowledge of foreign cultures and languages by supporting teaching assistantships in over 30 languages at hundreds of U.S. institutions of higher education.

“Marymount’s Center for Global Engagement is committed to expanding foreign language programming for our students, with a particular focus on building capacity for students to engage with critical language learning,” explained Victor Betancourt, Assistant Vice President of Global Engagement at Marymount University.

The CGE identified Arabic as a rarely taught language that would best serve the needs of Marymount students and enhance the global perspective of the campus community, and will host a Fulbright Foreign Language Teaching Assistant who specializes in the language. The FLTA will not only teach courses in Arabic but will also provide cultural enrichment activities that expose Marymount students and staff to the rich culture that surrounds the language. 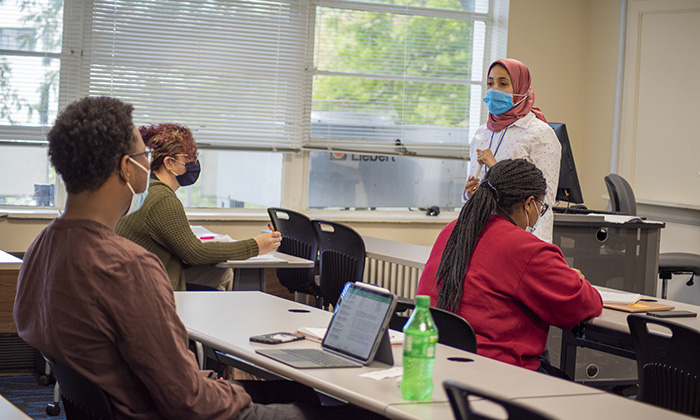 Hadeer Nouh, Marymount’s new FLTA, arrived on campus in August. Born in Alexandria, Egypt, she graduated with a bachelor’s degree in English Education from Alexandria University in 2012. She then pursued professional certificates in English language teaching, including TESOL and CELTA, and since 2014, Nouh has taught non-native speakers at various levels of language proficiency. She is currently pursuing a master’s degree in English for Specific Purposes at the Arab Academy for Science, Technology and Maritime Transport in Egypt.

Aiming to further her career as a language teacher and learn more about the American academic landscape, Nouh applied to the Fulbright Program in June 2020.

“I hope to teach Marymount students how to communicate using the Arabic language and to understand how it is written and spoken,” Nouh explained. “Through the Fulbright Program, I will be able to share my culture with other people and also learn about their cultures, too.”

Nouh is currently offering Marymount’s first Beginning Arabic course to a cohort of eight students. Classes focus on the fundamentals of the language, including the alphabet, numbers and basic phrases for conversation. 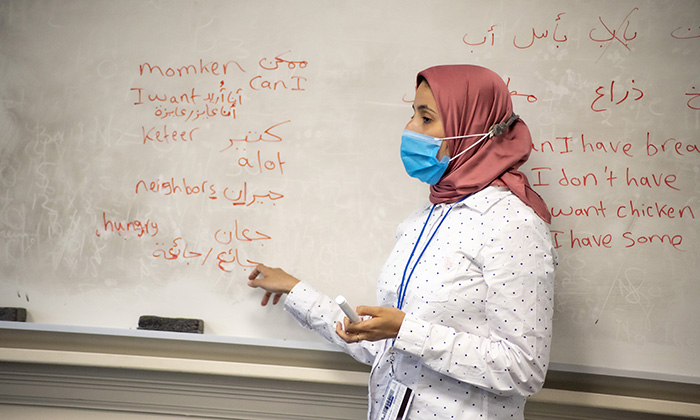 Upon learning of the new Arabic language program, freshman Lauren Harmon says she immediately signed up. With an interest in pursuing journalism, she hopes to learn one of the most widely-spoken languages in the world.

“I’m part of the Marymount Global Scholars Program, so I knew I wanted to take a language that’s applicable and I wanted to learn something that would help with my understanding of world prospective,” Harmon said.

For other students, like sophomore Abdulaziz Aljebrin, the course offers a chance to relearn the language. Aljebrin’s first language is Arabic, but he admits he’s forgotten a handful of words and how to write in the language after living in the U.S. for several years.

“I still know a lot of Arabic, but I want to go back to the writing and be able to identify letters of the alphabet,” Aljebrin explained. “I’ll be going back to Saudi Arabia soon and I would like to be able to speak more fluent Arabic than broken Arabic.”

Nouh plans to teach an advanced course next semester, Arabic 102, and four students have already committed to continue on with the language program.

“The CGE is honored to have this opportunity to host a Fulbright FLTA, and we hope that this will provide us with the foundation to help us meet an increasing student interest and demand for the study of Arabic,” Betancourt added.

For more information on Arabic courses and cultural opportunities, please contact the Center for Global Engagement.