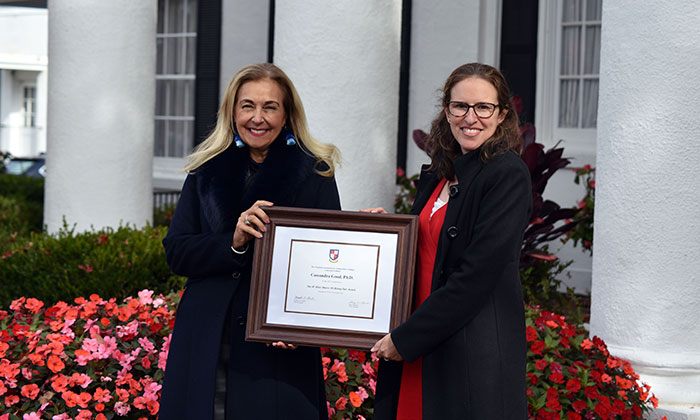 Dr. Cassandra Good, Assistant Professor of History at Marymount University and an accomplished researcher of early American history and George Washington, has been recognized by the Virginia Foundation for Independent Colleges (VFIC) with a H. Hiter Harris Family Award for her dedication to higher education and student success.

The special meeting and awards presentation, held virtually on Thursday, honored Dr. Good with the H. Hiter Harris III Rising Star Award. This recognition is bestowed on one faculty nominee per year across all VFIC institutions who demonstrates great promise early in their career. Recipients receive a stipend to support their scholarly research and professional development.

“Marymount University is truly lucky to have Dr. Cassandra Good on our team of distinguished faculty members,” said Dr. Irma Becerra, President of Marymount University. “She is not only an excellent professor to our students, but her love for research really makes her stand out. As a recognized scholar in her research field and a star in the making, it’s fitting to see Dr. Good honored by the VFIC as this year’s winner of the H. Hiter Harris III Rising Star Award.”

“So much of my career at Marymount has been successful because of the community here. There are so many amazing staff and faculty that I learn from every day,” Dr. Good explained. “I also have learned so much from my students. They ask me questions that make me rethink big ideas in history, make me create new connections to the present and just think about things in new ways.” 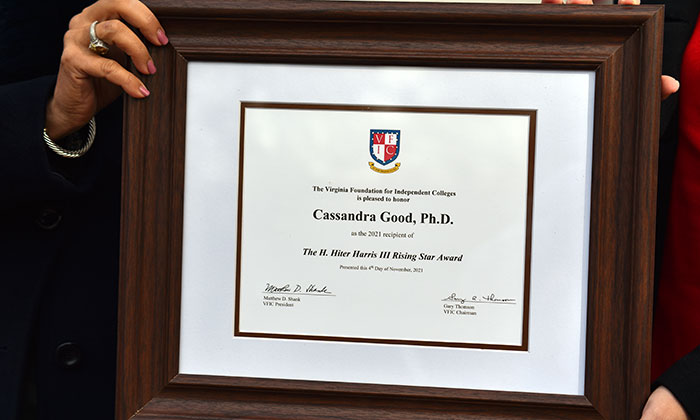 Trained in a multidisciplinary approach to history, integrating literature, art, material culture, gender studies and anthropology, Dr. Good joined Marymount in Fall 2017 with prior experience at the Smithsonian Institution and the University of Mary Washington, where she worked as Associate Editor of the Papers of James Monroe. At Marymount, she teaches courses focused on the history of early America from initial contact to 1877, with upper level courses that include ‘Colonial and Revolutionary America,’ ‘The Early Republic and Jacksonian America,’ ‘Race and Myth in Southern History’ and ‘The United States: Civil War and Reconstruction.’

Dr. Good is a scholar of gender and culture in the early American founding era, and presents regularly at scholarly conferences and to public audiences. Her work has appeared in academic journals and on popular websites like Slate, Smithsonian.com and the History News Network. Her first book, Founding Friendships: Friendships between Men and Women in the Early American Republic, was published by Oxford University Press in 2015 and received the Mary Jurich Nickliss Prize for the best gender or women’s history book from the Organization of American Historians in 2016.

Slated for release in 2023, Dr. Good’s next book – First Family: George Washington’s Heirs and the Making of America – focuses on the family of America’s first president and the ways that succeeding generations grappled with their political role in the new nation. It explores the untold stories of Washington’s step-grandchildren, the Custises, and also makes key discoveries about the lives of enslaved people owned by the family.

“This project has helped me realize how relevant history is, and makes me feel a certain urgency to my work,” Dr. Good said. “I have been able to meet living descendants of the enslaved community at Mount Vernon, whose members were owned by Martha Washington, and bring out their stories for the first time while working with them, learning from them and seeing how important this history is to them. I’m really grateful to get to do work that feels like it really matters right now.”

The research performed by Dr. Good, which was informed by her fellowship at the Fred W. Smith National Library for the Study of George Washington at Mount Vernon, also was recognized by the National Endowment for the Humanities (NEH). To fund the writing of her new book, the NEH bestowed a coveted Public Scholar grant – one of only 25 awarded every year.

The H. Hiter Harris Family Awards were generously created through endowments by the Harris family. The awards highlight the special features of VFIC colleges and universities by recognizing faculty members “whose professional history reflects a strong, clear and abiding commitment to excellence in classroom teaching within the undergraduate liberal arts and sciences.”

In addition to Dr. Good’s Rising Star Award, the VFIC also honored Dr. Deborah Miranda of Washington & Lee University and Dr. Stephanie Spera of the University of Richmond during the awards presentation with the 2021 Libby and Hiter Harris Excellence in Undergraduate Teaching Award and the 2021 H. Hiter Harris III Excellence in Instructional Technology Award, respectively.