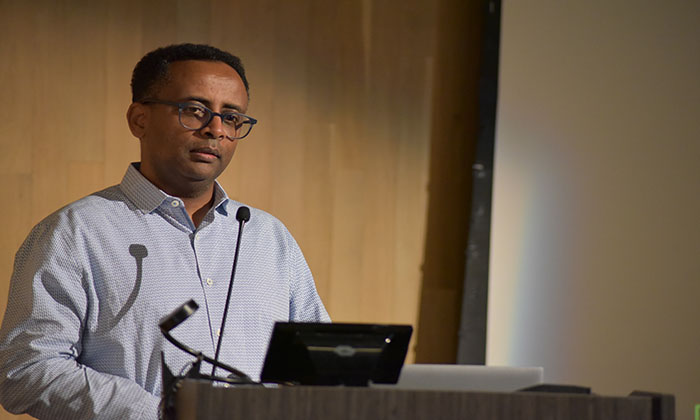 Last week, Marymount University’s College of Business, Innovation, Leadership and Technology (BILT) joined over 20,000 organizations worldwide in celebrating Global Entrepreneurship Week, which through various lectures and seminars is utilized to help entrepreneurs transform their ideas into tangible action. To mark this occasion, the College of BILT hosted two renowned design entrepreneurs, Jomo Tariku and DuVäl Reynolds. They spoke with students from Marymount’s School of Design and Art about how they built their successful careers through years of hard work and perseverance, and also shared advice on what the students can expect when they enter into professional design fields or become entrepreneurs themselves. 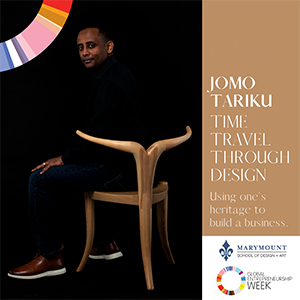 Jomo Tariku, an Ethiopian-American artist and industrial designer, is known as a pioneer of modern African design. In 2017, Tariku launched his namesake collection that has been featured in numerous publications, including Elle Decor and Architectural Digest. His work has also been included in the permanent collection of prestigious museums such as the Metropolitan Museum of Art in New York City and The Mint Museum in Charlotte, N.C.

More recently, his furniture designs were featured in the film ‘Black Panther: Wakanda Forever,’ which was released earlier this month. Tariku told the audience how much he appreciated the support he received throughout his career, which helped him push through initial years of struggling to get recognized.

“As you can imagine, it’s very financially intense,” Tariku said at the seminar. “I’m very lucky to have a wife and family that believes in what I’m doing and a brother who believes in this dream I’ve had.”

Interior Design student Milena Tekle said the presentation inspired her because Tariku shared that even if setbacks happen, anyone can accomplish their dreams if they have a passion for what they do and are willing to put in the work.

“Through his dream of furniture making, Jomo has made it possible for his heritage and personal story of Ethiopia to be timeless and be a part of history for future generations,” Tekle said. 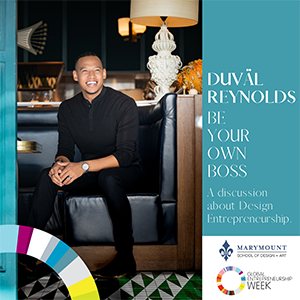 For the past five years, DuVäl Reynolds has been the owner of his own interior design firm, DuVäl Design, LLC. It has been featured in notable outlets including The Washington Post, Architectural Digest and Home & Design Magazine, among others, and Reynolds himself currently serves on Marymount’s Interior Design Advisory Council.

Before owning his own business, Reynolds spent over a decade in the interior design industry, honing his craft in both the creative and business sides of the field. He spoke to Marymount students about learning how to be your own boss when starting up a design business.

“DuVäl is a successful entrepreneur and interior designer who owns multiple businesses and has national and international recognition,” said Jessica Bonness, Assistant Professor of Interior Design at Marymount. “He is super engaged with our students, very genuine in his advice and incredibly dynamic.”