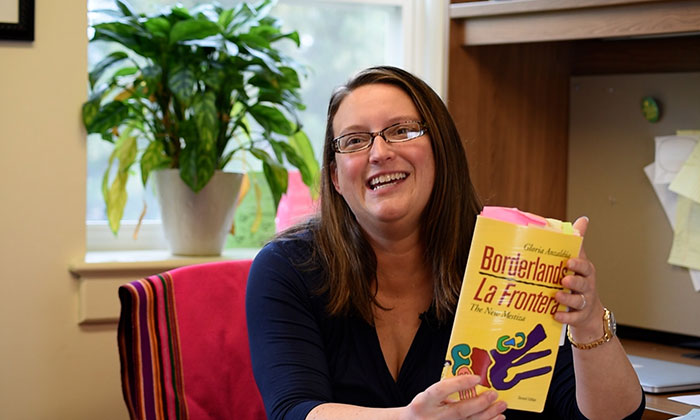 In this episode of “Faculty in Focus,” we highlight Dr. Leigh Johnson, Associate Professor of Literature & Languages, and explore her research on “Chicana Visions: Ana Castillo and Cherríe Moraga’s Friendship, Falling Out and Forgiveness.”

What is the topic of your current research?

My research is centered on the intersections between gender studies and feminist theory, and Chicano and Chicana literature. I’ve done a lot of different projects in those areas, and currently my research is focused on Chicana women’s friendships and the ways that those have played out over the course of the past 50 years or so.

What kickstarted your interest in this particular research on “Chicana Visions”?

For many people, including myself, it was Gloria Anzaldúa’s “Borderlands/La Frontera.” It is just a foundational work in Chicana studies and has been cited and worked with and so forth, but one of the most unique things about this book is the way that she writes. It is an academic piece, but it’s written in Spanish, Nahuatl, poetry and academic prose.

She says, ‘we need Coatlicue to slow us up so the psyche can assimilate previous experiences and process the changes. If we don’t take the time, she’ll lay us low with an illness, forcing us to rest. Come, little green snake – let the wound caused by the serpent be cured by the serpent. The soul uses everything to further its own making.’ She’s talking about the ways that borderland psychology works in terms of her own writing, but also in identity formation for people who live along the border.

I was very excited when the University of Texas at Austin opened Anzaldúa’s archives, and I found this piece where she’s writing about the new woman, or ‘la mujer nuevo,’ and she draws the serpent eating its own tail. Often, I have my students read these sections out of “Borderlands” and play with the ideas, and then I say, ‘well, why don’t you draw it and see what happens?’ Many of them end up drawing something similar, and I think it’s really funny that we have that connection between how we picture a text and how we can learn from the visualization of a text, in addition to what the words of the text say. I just find the material really rich and interesting, and I’ve read this 20 times and there’s always something new. That is one of the things that keeps bringing me back to this kind of research.

What have you learned after looking into these letters from different Chicana feminist authors and poets?

In the 1960’s and 70’s, when the Chicano movement was starting, women felt marginalized by it. There’s a lot of documentation of women being asked to make coffee or support the men in the movement, and not really to have their own voices and their own concerns heard…being accused of being sellouts to Anglo-feminism if they agitated for more women’s voices in the movement.

So in the 1980’s, Gloria Anzaldúa and Cherríe Moraga published “This Bridge Called My Back: Radical Writings by Women of Color,” and it was tremendously important for the third-wave feminist movement. Their collaboration is possible because they started working through underground presses, they started meeting each other, Chicana writers started writing to each other…and building a community where they would invite each other to conferences, or they would say, ‘here’s what I’m working on – do you have anything that might work with this? How can we collaborate?’ And so, there’s a real spirit of collaboration, and sort of saying, ‘nobody else is going to build this for us, so we have to work together.’ That’s been really interesting to read in the letters…and in Anzaldúa’s archive, I find letters from Sandra Cisneros, where she says, ‘oh, I really want to work on this but Random House is breathing down my back for my new piece, so I can’t contribute to yours.’ And then, they talk about splitting costs at different conferences. They talk about their families, their children, their relationships in these letters. So you can really see how it’s an academic partnership, a scholarly partnership and a really close personal collaboration.

What progress have you made in your research so far?

I have been working with these writers for about 20 years, but in different capacities. I’ve done several pieces on them just solo or by themselves. Some of the work came from the work that I was doing in graduate school, about ways that violence against women was represented in various texts. I’ve always been interested in the conversations that literature seems to have with itself and with each other and with its audience…that you can see the threads of intertextuality running through different pieces.

Where I am currently is still working on projects about how women, as they write out their identities, find ways to plug into larger communities or to make change through the kind of writing that they’re doing…and that sometimes, different groups of women will be writing about the same thing, trying to make some kind of change, but they’ll be doing it in really different ways. I find the rhetorical constructions of that really fascinating and really useful for us as a larger community to know and for students to know…because as they work through their own writing situations and purpose and rhetorical needs of their audience, it’s important for them to understand how those arguments are built. But also, as a larger national community, it’s important for us to understand how people’s voices may say something differently, but there is a place to collaborate and work for a larger goal.

To that end, I will continue this work. My next project is to extend this idea, and I’ve been working a lot with the ways that parenting and relationships have factored into authors’ abilities to do their activism, to write about their literary goals and so forth. My next project is networked mother work, and the ways that communities of Chicana and Latino women in the 1980’s and 90’s and into the early 2000’s worked to network with others, to do the kind of community building, justice-seeking collaborative work. Much of that initially was focused on caring for each other’s children, if one person had to go out for a theatrical performance or one person was called upon to do some kind of invited speaking event. This community of support enabled larger professional ambitions.

You recently formed a ‘pen pal’ partnership with a Texas university – has that contributed to your research on Chicana literature?

Absolutely! That was such an important partnership that is ongoing, where our students were pen paling together. My colleague at the University of Texas Rio Grande Valley and I were teaching some similar texts during the semester, and the students would exchange emails about five times during the semester to talk about the text they were reading. It was so meaningful for Marymount students to hear about this literature and what it’s like studying it on the border, and then for students at University of Texas Rio Grande Valley to be reading the same thing and think about it from this sort of nexus of political power…how D.C. is positioned in the country. So that was a really wonderful experience for me and for the students.

My colleague and I have written an article that will be coming out in the next six months or so on the experience and how pen pal collaboration has increased empathy and cultural awareness during COVID, in a time when people are not really meeting new people as much as they had been in the past. It has had an impact on my work because I have seen how the exchange of ideas, the students writing to each other, mimics a lot of the letters that I found when I was doing archival research between these authors…and thinking about how people work out ideas in letters is very different from what it looks like as a published piece. So that’s kind of where I’ve been working on the friendship piece of it. You build friendship, you build empathy, you build relationships through the letters – and then how does that work out when one is publishing their ideas?

Given the changing demographics of the nation and the spotlight on border issues today, how important is it for scholars and students to be exposed to this kind of literature?

I think it’s essential that we are exposed, that we learn, that we stay open to learning new perspectives. I love this kind of work because our students at Marymount speak lots of different languages. They come from lots of different backgrounds, and so for something like Anzaldúa, I’ll have students in a classroom who have studied Spanish as non-Spanish speakers, or as English language speakers who are learning a foreign language. I’ll have students in the classroom whose first language was Spanish. I’ll have students in the classroom whose first language is something other than Spanish or English, but have studied both. And so, the linguistic experience of this text is really interesting for students because they can see how different layers of audience are being reached through the text – and maybe sometimes, she’s talking to this audience, and sometimes she’s talking to a different audience. Understanding that sometimes you’re not the audience for a piece of work is so important, I think, in our political discourse today, in our cultural discourse…to understand when you are being asked to learn, when you are being asked to listen and when you’re being asked to speak or participate. Those kinds of registers can be really meaningful for students as they learn about the other people in the classroom, too.

I think it’s important to see work that’s been published and has been here…it seems old now, right, the stuff from the 80’s and 90’s? But it is really showing us how the groundwork was laid and what we can build on those foundations. I think that’s really important for me to understand, for the greater community to understand and for the students that I work with to understand.