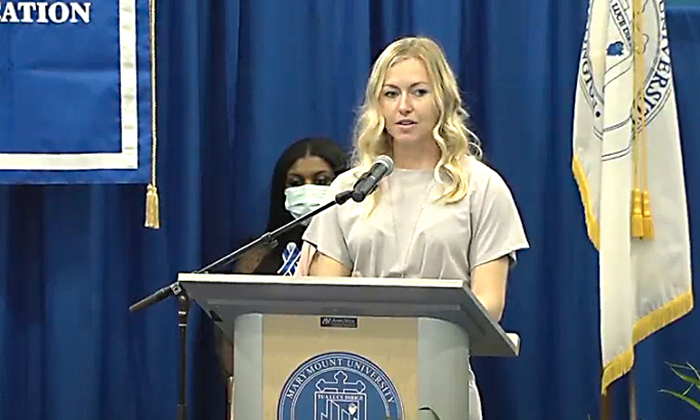 The last year has been a vivid reminder – not that any was needed – of the role nurses play in the health-care system and in the lives of those they come into contact with.

“Our patients are depending on us to be their voices in their most vulnerable moments,” said Aidan Phillips, one of 60 Marymount University students who earned bachelor’s degrees in nursing and on May 13 were welcomed into the career in the traditional “pinning ceremony.”

“Walk into the profession proud – a wonderful, trusted and honorable profession,” said Dr. Kenneth Harwood, dean of the College of Health and Education, during a ceremony held in the university’s Lee Center.

Each of the preceding two semesters, the ceremony had been a “virtual” affair, but improving health conditions made it possible – with some alterations – to bring the graduates and their families together.

“It’s a blessing to be able to do this in person this time around,” Marymount president Irma Becerra said.

“We have learned many things [during the COVID era], perhaps none so enduring as the vital role nurses play in our health-care system and our society,” Becerra said. “Nurses suit up every day and face an invisible enemy. They put themselves in harm’s way to save others.”

The modern-day pinning ceremony has its antecedents in the Crusades of nearly a thousand years ago, when members of the Knights Hospitaller (a Catholic order of chivalry that combined military force with the responsibility to care for others) presented its newest initiates with Maltese crosses. The concept was resurrected by Florence Nightingale in the 19th century, and pinning ceremonies for new graduates became standard practice about a century ago.

The pin “represents the knowledge, care and leadership we bring to the profession and to our patients,” said Saidah Rahman, who earned a bachelor of science in nursing degree and has entered into “the brotherhood and sisterhood” of the profession.

Among them is Marlene Malek, a 1979 nursing graduate of the university whose name (along with that of her late husband, Fred Malek), adorns the Malek School of Nursing Professions at Marymount.

“I still love my pin – to me, the most important and best part of graduation was the pinning ceremony,” she told graduates.

The pin symbolizes not just the achievement of earning a degree, but a commitment to a lifetime of learning ahead.

Malek said the nursing profession has seen exponential change in the past decades, and “Marymount has always been in the forefront.”

When Malek graduated, an associate’s degree was the highest degree level attained by many nurses, she noted. Today, Marymount offers nursing coursework up to the doctoral level.

“It’s an exciting time to be a nurse,” Malek said. “Marymount is on the cutting edge, a beacon of excellence.”

Graduates from Marymount’s programs have maintained a pass rate on the National Council Licensure Exam of greater than 90 percent for the past five years, university officials said.

Among the 60 nursing graduates were 38 who completed the traditional four-year bachelor of science in nursing (BSN) program of studies, along with 22 more who were part of the university’s accelerated BSN program, an option available to those who hold a bachelor’s degree in another field and aim to switch careers.

Among the latter was Nicholaus Huff, who joined his wife, Rachael, in the profession.

The coursework was challenging, but “it prepared and strengthened us,” Huff said, noting that faculty and staff members were “with us every step of the way.”

The aspiring nurses received an extra dose of real-world experience in recent months, as they volunteered their time at vaccination clinics on campus and across Arlington, giving thousands a dose of protection against COVID.

The ceremonies over, the newly minted nurses dispersed in all directions. But, Aidan Phillips said, they all had one goal.

“It’s time to go out there and make Florence proud,” she said.