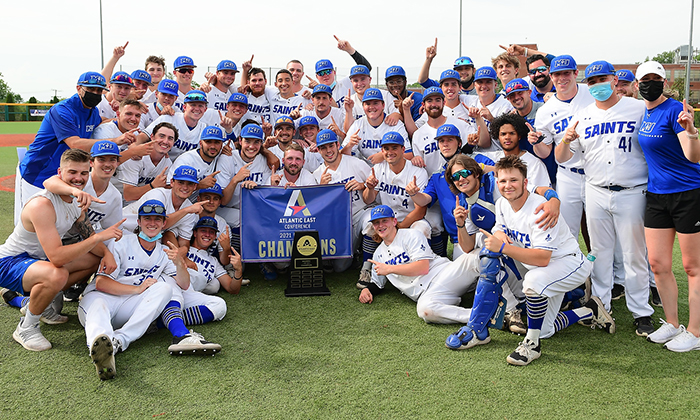 For the first time in program history, the Marymount Baseball team brought a conference title to Northern Virginia, as the Saints defeated Immaculata University to claim the 2021 Atlantic East Conference championship.

The Saints polished off an undefeated Atlantic East Tournament on Saturday afternoon with a thrilling 10-5 victory over the Mighty Macs at Nationals Youth Academy. As was the case throughout the regular season, Alex Lemery paced the Saints at the dish. The junior finished 2-for-4 with three RBI and one run. Bryce Smith went 1-for-3 with two RBI and a run. The tournament’s Most Valuable Player, Bobby Leitzel, finished the title game 2-for-5 with two stolen bases and one run.

Immaculata, the No. 2 seed in the postseason, came out firing and raced out to a 5-1 lead through three innings. The Saints were undeterred, however, as Kyle Lewis entered the game in relief and shut down the opposition.

Lewis tossed four innings of one-hit ball to stifle Immaculata’s potent lineup. The freshman rose to the occasion and fanned three batters while surrendering just one walk. As Lewis dealt on the mound, MU began its comeback in the fifth inning. With runners on the corners, a sacrifice fly from Lemery scored James DiGiulian and made it a 5-2 contest.

After a scoreless sixth frame, MU showcased a deft eye at the plate to post an eight-run seventh inning. MU worked three walks and wore two pitches to wear down Immaculata’s bullpen with patience at the dish. Lemery punished the Mighty Macs with a pair of singles, highlighted by a two-run effort that capped the game-winning rally.

With a five-run lead, the Saints turned to their deep stable of arms out of the bullpen. Kenny Sysyn worked a scoreless eighth inning before rookie Jake Andrews entered the contest in the ninth. The St. Johns, Fla., native used just 14 pitches and ended the game with a double play to seal the game.

Selected as the sixth seed, Marymount will challenge first-seeded Salisbury University in its opening contest on Thursday, May 24.