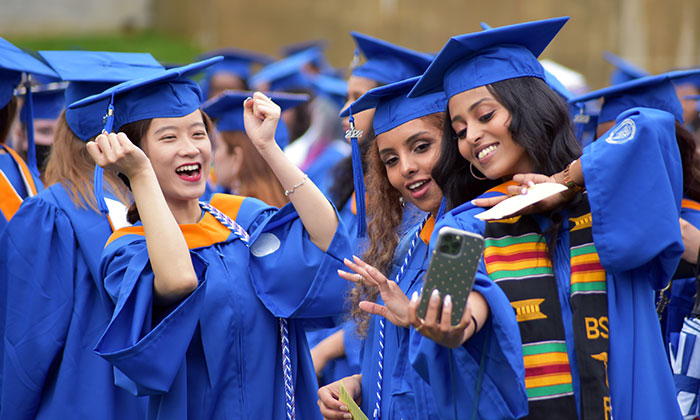 The past two years have highlighted the need for passionate new members of the health-care and educational professions, and the first of three commencement exercises held by Marymount University the weekend of May 13-15 gave students in the university’s College of Health and Education their moment to both celebrate success and mull what comes next.

The Class of 2022 proved “wonderful, empathetic and resilient,” said Kenneth Harwood, dean of that college, during commencement ceremonies that started at 10 a.m. on the dot May 13.

Held outdoors on campus, the commencement ceremony successfully dodged rainstorms, the latest and perhaps the last challenge (if a minor one by comparison) faced by a Class of 2022 that started its studies in the pre-COVID era and earned degrees as, one hopes, a degree of normalcy is returning.

“You have all been through a lot – a diverse class, coming from all over the world and from all sorts of backgrounds,” said university provost Hesham El-Rewini, who offered graduates advice he provides his own children.

“You were pushed and you were challenged, but that’s what makes this moment so much more wonderful and so much more satisfying,” she told graduates. “You showed all of us what you were made of. Marymount has prepared you.”

The ambassador, who spent much of her childhood in Northern Virginia, noted that many Saudi citizens have attended and currently are attending Marymount. She was invited to speak because she serves as “in incredible symbol of gender equality and social reform,” Marymount president Irma Becerra said.

The ambassador noted that 70 percent of her country’s population is under age 35, and urged the newly minted graduates to maintain a flexible attitude toward life’s inevitable twists and turns.

“Don’t be rigid,” she said. “Trust yourself. We’re often are too anxious to plan for the future – sometimes the future has its own plan for us. Opportunities present themselves at moments that seem least likely. Adaptability is the key. Change is constant, but you’re leading this change. It’s your turn.”

Becerra, who arrived as university president when 2022’s graduating seniors started as first-year students, praised the student body for its ability to change with evolving conditions.

Father Gabriel Muteru, the university’s chaplain, used his invocation to request a break in the rain showers (which was granted), and reminded all in attendance that the ceremony marked “a day of rejoicing and gratitude.”

After having walked “the hallowed halls of wisdom with diligence,” it was now time for students to put the skills they learned into the service of humanity, said the chaplain, completing his first academic year of service at the university.

Marymount has about 4,000 students enrolled, representing 49 states and 75 countries. Founded as a women’s junior college in 1950 by the Religious of the Sacred Heart of Mary order of Roman Catholic nuns, it has since grown to a coeducational institution conferring degrees up to doctoral level.