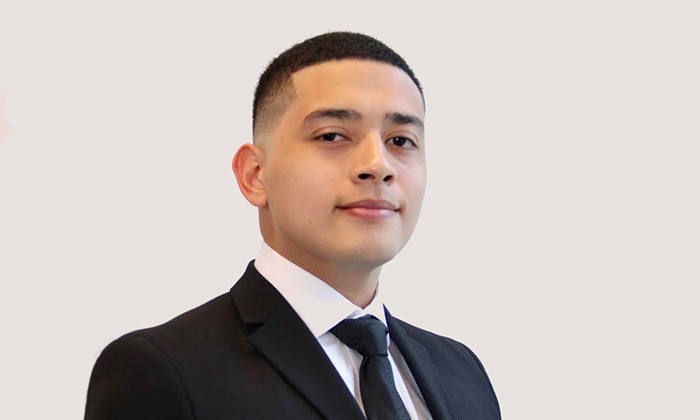 For the second consecutive year, a Communication student at Marymount University has been named the recipient of a scholarship bestowed by the DC Society of Professional Journalists Sigma Delta Chi Foundation (SDX/DC).

David Moreno, a current Marymount junior, is one of only three recipients of SDX/DC scholarships among all university students in the national capital region. He will receive $3,000 of financial assistance from the Foundation as he completes his studies in pursuit of a career in broadcast journalism.

“After graduation, I hope to work for a local newspaper in the Washington, D.C., metro area and report on local events, sports and politics,” Moreno explained. “In 10 years’ time, I would like to be broadcasting on international stories for a well-known news organization such as CNN, CBS’s 60 Minutes or ABC News.”

He becomes the second Marymount student in two years to receive a SDX/DC scholarship. Moreno follows in the steps of Lauren Galdeano, a graduating senior and Editor-in-Chief of the The Banner, Marymount University’s student-produced newspaper, who was awarded a scholarship from the Foundation for the 2020-21 academic year.

Dr. Kimberly Meltzer, Associate Professor of Communication at Marymount University, says Moreno’s pursuit of a journalism career has been inspired by guest speakers in class visits from figures such as Jonathan Elias, TV news anchor for WJLA/ABC7. She adds that Moreno has shown tremendous promise through his work as a section editor for The Banner, where he is set to serve as Managing Editor next year.

“David has reinvigorated the Opinion section of The Banner while also contributing strong content to other sections,” Dr. Meltzer said. “Working as an editor and contributor for this newspaper provides great experience and the opportunity to publish journalistic work while still in college. This is excellent preparation for future careers in journalism, communication and other fields that require strong writing, organizational and research skills, as well as multimedia production abilities.”

Moreno, who has lived in Honduras for the majority of his life, says he encountered countless tragedies and atrocities there at a young age. This has influenced his decision to pursue a journalism career, as he reflects on a sense of responsibility he feels to tell these stories.

“Not many people are aware of the atrocities happening around the world at the moment, and journalism is the one career that will allow me to share what is happening with others,” he said. “This is why I aim to become an international correspondent, because of stories such as the genocide occurring in Xinjiang, China, where 12 million Uigher Muslims are being subjected to forced labor, torture and sterilization.”

“Through my work, I want to represent Honduras and all first-generation Americans in the best light possible.”

Scholarship recipients were selected by a committee of journalists from a pool of area students who applied. Based on their applications, finalists were interviewed by the panel and questioned about their aspirations, journalism ethics, the First Amendment and related topics.

“Journalism needs well-trained practitioners today, more than ever,” said SDX/DC Foundation President Reginald Stuart, in announcing the selections. “We hope the students we have selected will be able to use this financial aid to reach their aspirations and continue helping our society appreciate and understand the value of a strong free press.”

The scholarships are funded from members of the D.C. chapter of the Society of Professional Journalists, along with support from the Gridiron Club and Foundation and individual gifts to the Sigma Delta Chi Foundation from journalism education advocates.