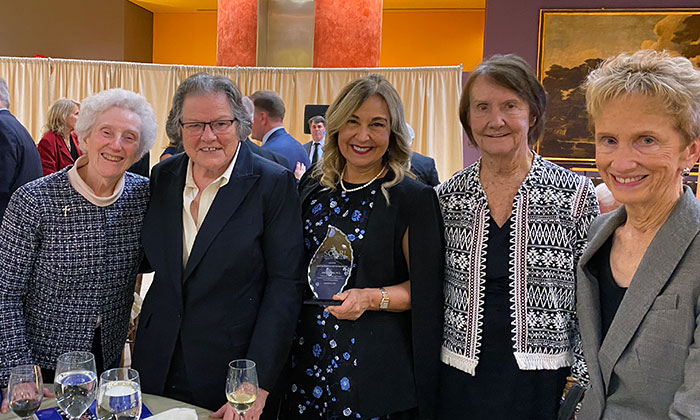 At its annual Awards Gala on Wednesday night at the Embassy of Italy in Washington, D.C., the Support Our Aging Religious (SOAR!) organization honored Marymount University President Irma Becerra with the prestigious 2022 Saint Elizabeth Ann Seton Award for her dedicated work at the University and throughout her career in higher education. She becomes the second figure in Marymount history to receive the award, following Sister Majella Berg — the institution’s longest-serving president who led the University from 1960 to 1993. Sister Majella received the Award in 1991.

“I am so honored and humbled to receive the Saint Elizabeth Ann Seton Award,” President Becerra said at the 36th annual Awards Gala held by SOAR! “It means so much to know that Sister Majella Berg, the third president of Marymount University and someone who has inspired me and was so truly transformational for our institution during her 30-plus year tenure, received this honor as well.”

The Saint Elizabeth Ann Seton Award recognizes individuals who have distinguished themselves through their leadership and generosity in the Catholic community, in the spirt of Saint Elizabeth Ann Seton herself. President Becerra was highlighted by SOAR! for launching Marymount’s Strategic Plan, ‘Momentum,’ adding market-driven academic programs, improving the University’s information technology infrastructure with the implementation of Workday and navigating the school community through the COVID-19 pandemic.

Sister Maria Timoney, a member of the Religious of the Sacred Heart of Mary (RSHM) and a Marymount University trustee, presented the award to President Becerra and remarked on the University’s core values of intellectual curiosity, service to others and embracing a global perspective. Marymount was founded by the RSHM sisters in 1950.

“Those values remain true today under the guidance of Dr. Irma Becerra as she follows in the footsteps of the Sisters,” Sister Maria said.

President Becerra added in her speech that witnessing RSHM’s goals and ideals carried out today at Marymount gives her a sense of pride for the great progress that has been made throughout the years.

“A few years ago, I had the opportunity to visit Beziers, France, where the Religious of the Sacred Heart of Mary order had started, to more fully understand the significance of their mission and collaborate with the RSHM sisters,” Dr. Becerra said. “Back in the 1800’s, the RSHM envisioned an education that would prepare women with the same level of academic rigor that only men received at the time.”

“Today at Marymount, we are continuing this mission by promoting career preparation and providing opportunities for personal and professional growth — for both men and women.”