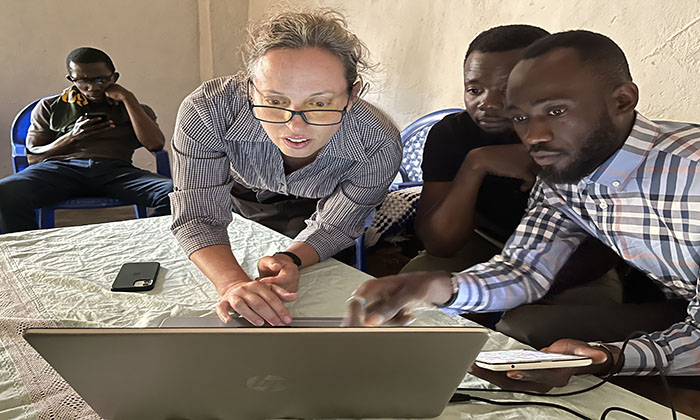 Art is a medium that channels the human experience and one that inspires and unites people all around the world, even when it is created in places you’d least expect.

This past August, Dr. Elizabeth Langran, a professor in Marymount University’s School of Education, traveled with a four-person team to the Dzaleka Refugee Camp in Malawi to help document the artistic contributions of refugees in the camp. The camp has more than 50,000 refugees, mainly from the Democratic Republic of Congo, Burundi and Rwanda.

Dr. Langran met and interviewed poets, musicians, dancers, visual artists and countless others who channel their day-to-day hardships into beautiful pieces of work.

“We (as a society) can tend to think of refugees as being victims,” Dr. Langran said. “And it’s true that many of them are victims of a lot of different things. But at the same time, they have amazing talents.”

This endeavor was originally initiated by a colleague and friend of Dr. Langran, Dr. Lisa Gilman, a professor of folklore at George Mason University. Dr. Gilman has pursued research on refugees throughout her academic career, and she and her husband previously lived in Malawi.

In order to differentiate from how refugee stories can often be covered in the news, Dr. Gilman sought to show the beauty that can emerge from places of struggle. Through their travels, Dr. Gilman is leading a team of refugees in putting together a book using their own words and art to help promote their talents to the rest of the world. They are currently searching for a potential book publisher.

Dr. Langran says the Dzaleka Refugee Camp, in particular, is almost like a small town with its own businesses that refugees themselves operate. However, it’s not always safe and many of the refugees can face violence in the camp, in part due to the same tribal and ethnic conflicts that they have escaped from.

“You have an entire town of people who are living with trauma and are in a very small space,” Dr. Langran said. “A lot of the artists that I interviewed talked about how seeing suffering or experiencing hard times motivated them to write their poetry, or that singing brought them such relief.”

“We lived in the refugee camp with a Burundian family and we interviewed the artists. I speak French so I was able to interview the Congolese artists who don’t really speak English. And we did some video and photo documentation. It was just an honor to be part of the team.”

Dr. Langran also met a principal who started a school in the camp using the social media tool, WhatsApp. This application was used to involve those who couldn’t physically access schools inside the camp or in neighboring villages due to mobility issues.

“Very few people have computers,” Dr. Langran said. “But a lot of people have smartphones, and they use WhatsApp because it uses data instead of getting a charge for individual texts or voice. The principal started a school on WhatsApp and he had volunteer teachers, even from other countries, and a bunch of students. Even homework is submitted through the app.”

As someone who teaches educational technology, this was also a story that gravitated to Dr. Langran.

“I always love finding the educators wherever I go.”

Dr. Langran says she will continue to assist Dr. Gilman in completing the book of documented artwork and stories from the Dzaleka Refugee Camp in whatever way she can. The contributions of these artists are highlighted annually as part of the Tumaini Festival, organized by the camp’s refugees.