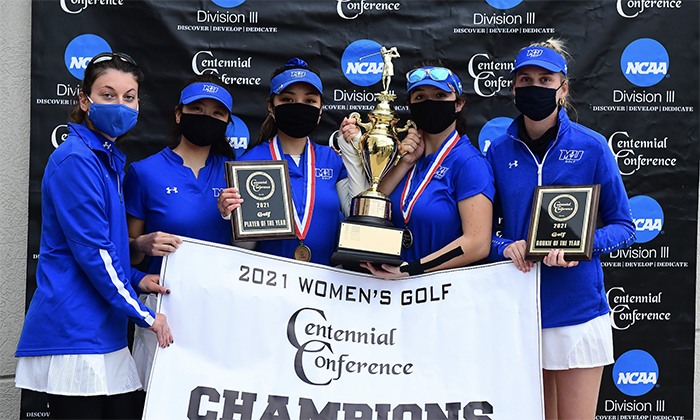 For the first time in program history, the Marymount University Women’s Golf team claimed the Centennial Conference Championship with a superb showing across the two-day tournament.

The Saints registered a team score of 359 (+79) to end the championship with a team total of 722 (+162). Marymount dominated the field at the Conestoga Country Club and finished 85  strokes ahead of second-place Dickinson College, which totaled a score of 807 (+247). Cabrini University checked into third place with a two-round score of 843 (+283) and Ursinus College finished fourth with a score of 916 (+356).

MU’s dynamic duo of Isabel Trojillo and Hunter Gillis led the way once again. The pair maintained their first and second-place spots, respectively on the leaderboard. The individual championship went to Trojillo after she won a one-hole playoff against Gillis. The junior carded an 88 (+18) to finish with a final score of 172 (+32). Gillis matched Trojillo’s two-round total after posting an 87 (+17) on Sunday afternoon.

Peyton Kraras finished sixth with a two-day score of 187 (+47). The rookie was consistent over both rounds and tallied a 94 (+24) to close out the tournament. Janlynn Ngo shaved 11 strokes off of her score from round one and posted a 90 (+20) to earn an eighth-place finish with a score of 191 (+51). Gina Carvelli rounded out MU’s performers with an 11-stroke improvement on her opening round score with a card of 94 (+24). The junior finished the tournament with a score of 199 (+59).

For their stellar performances, the Saints picked up plenty of recognition from the conference. Trojillo was named the Player of the Year, while Kraras was crowned as the Rookie of the Year. After finishing in the top two spots, Trojillo and Gillis were both named to the All-Conference Team.

Marymount returns to the course on Friday, April 23, for the Atlantic East Conference Championship at the Wyncote Golf Club.

The Centennial Conference competes in the NCAA’s Division III.