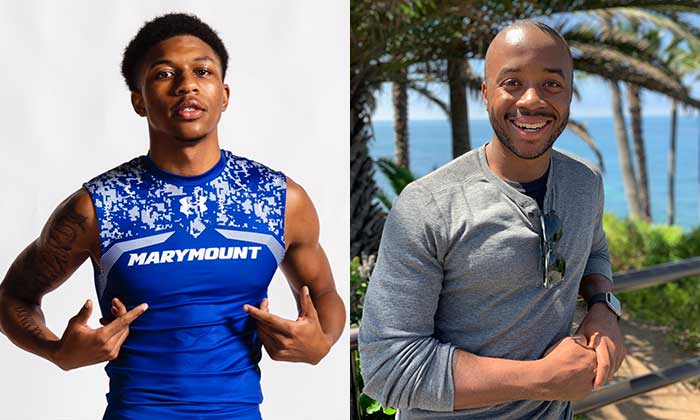 During the first week of Black History Month, two Marymount University students achieved national recognition for video stories they created to illustrate how the resurgent civil rights activism of 2020 and the ongoing movement for racial equality has personally impacted them.

All higher education students and faculty were eligible to share a video or short story to participate in the contest. Participants explained how they have drawn inspiration from Black history, events, movements or leaders, and their entries were judged on their relevancy, authenticity, organization, creativity and positivity. Three winners were selected in both the student and faculty categories.

For his contest-winning video, Walker focused on the legacy of former NFL quarterback Colin Kaepernick, whose civil rights activism began in 2016 through his kneeling during the national anthem to protest racial injustice and police brutality. His actions resulted in a wider protest and social justice movement.

“I was only 16 at the time when he first kneeled, but as I got older it made more sense as to why he did it,” Walker said. “It doesn’t matter who you are, where you come from, what your background is, how much money you have in your pocket – you have a platform and you must use it in order to make change in this world.”

Walker, who is an athlete himself and a member of the Marymount Men’s Track & Field team, described an admiration for Kaepernick’s decision and his belief that it lives up to the slogan, ‘More Than an Athlete.’

“Black history is more than just your Martin Luther Kings, your Rosa Parks, your Malcolm X’s,” Walker added. “They set the way…and now it’s up to us, this generation, to set the way for the future.”

In his prize-winning submission, Swann’s work features a visual poetry style that opens with the names of Breonna Taylor, Freddie Gray and George Floyd – all African Americans whose deaths sparked nationwide protests. The following is an excerpt of words displayed in Swann’s video:

“I am Black. What is my crime? To dream or love? To reach for the sky? Why does your heart so easily hate? A choice not to understand…the emotional struggle…of the extraordinary Black man.”

After hearing the award announcement, Swann reflected on the many emotions – fear, responsibility and pride – that he experienced while creating the poetic work. He says by the end of the process, he felt empowered and eager to chase that feeling in the future.

“My goal for this video was to speak out against the injustices that continue to arise against an entire race of people – brothers, sisters, husbands, people that look just like me. Doubt quickly began to sink in as I asked myself, ‘when will it be my turn?’” Swann said. “I realized that I had a voice, and now more than ever I have a responsibility to speak up for those who no longer can. Through my words, my goal was to help anyone who was willing to listen understand that encouragement of one race does not disparage the other.”