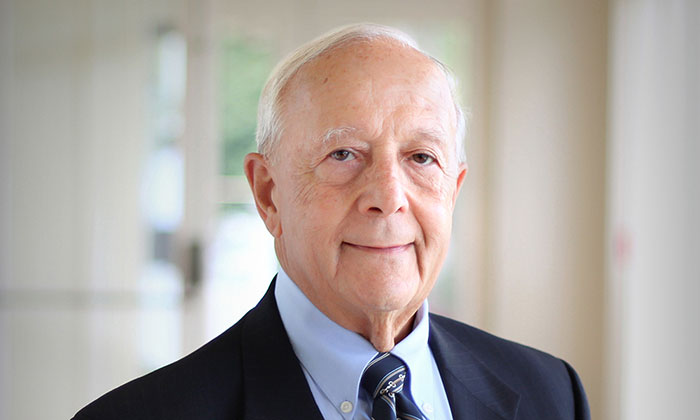 Paul Lanzillotta, an impactful figure on Marymount University who helped shape the institution over the years as a longtime trustee, generous supporter and former faculty member, passed away this past weekend.

Lanzillotta’s ties with Marymount are extensive, and date back to 1979 when he was first appointed to the University’s Board of Trustees – first serving under the venerated Sister Majella Berg, who was President at the time. His steady influence grew as he assisted in guiding the institution forward, including through his service as Second Vice Chairman.

In 2004, Lanzillotta stepped down from the Board but his heart remained with Marymount – continuing his financial contributions to the President’s Circle and receiving an Honorary Doctorate of Letters in 2007.

“As President of Marymount, I had the honor of getting to know both Paul Lanzillotta and his wife Ann, who passed away in 2020. They both were among volunteers who founded the annual diocesan Catholic Charities Ball, which has raised millions of dollars to benefit the community over the past 40 years,” reflected Dr. Irma Becerra, President of Marymount University. “The Lanzillotta family will always be a model for our University’s core value of service to others, as they put that value into practice every day.”

Lanzillotta’s legal career spanned several decades, with 30 years spent at First Virginia Banks, Inc. (formerly BB&T and now Truist) as Senior Trust Executive before joining Manning, Murray, Barnett & Baxter, P.C. He served as an expert witness in estate and trust administration litigation, and was a longtime member of the Trust and Estate sections of the American Bar Association, the Virginia State Bar and the Arlington County Bar Association. He retired from law practice in early 2020.

Lanzillotta’s dedication to serving others also extended to his time in the military, proudly serving in the U.S. Army from 1953 to 1955 and as a captain in the Reserves from 1955 to 1961.

To honor his life and service, Marymount will hold a Memorial Mass this spring in the Sacred Heart of Mary Chapel on Main Campus at a specific date and time to be determined.