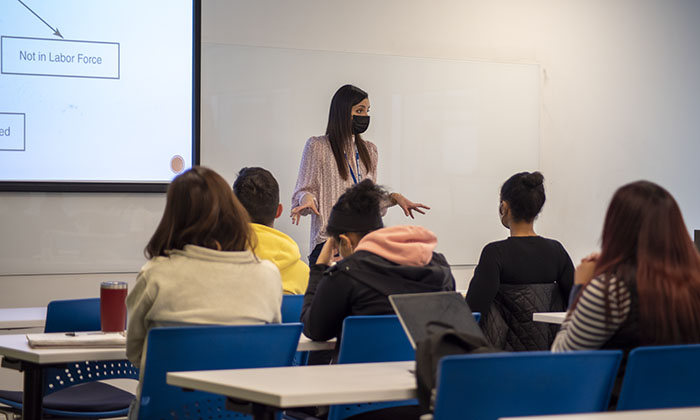 In this episode of “Faculty in Focus,” we hear from Dr. Amel Ben Abdesslem, Assistant Professor of Economics. She shares her latest research, “Using Netflix Original Series to Teach Economics: A Diversity and Inclusion Approach.”

Tell us about your background and how you entered the field of economics.

I’m actually French and was born and raised in the southwest of France in Bordeaux, not far from Béziers, where the founders of Marymount University, the Religious of the Sacred Heart of Mary, originated.

I feel like I discovered economics by luck after high school. I had to choose a major and I just didn’t know what to do. I picked economics because I didn’t know anything about it, but it was the right pick and I love it. I completed a B.S. in Economics and two master’s degrees in International Economics and Finance, and finally, I received my Ph.D. in International Economics from the University of Bordeaux before moving to the United States in 2014. I began teaching at Marymount University in 2017 and it’s been such a great fit.

What sparked your interest in using Netflix as a way to teach economics concepts?

I’ve noticed that my teaching style has changed over the years. When I was teaching in France, I was very traditional. When I moved to the U.S., I realized how different students were, in the sense of the way they learn. Students are very different from each other and you have to use different teaching methods to reach them all. I realized that just presenting a lecture wasn’t going to work anymore.

I began including music in my lectures because I noticed that in several songs, there were a lot of economics concepts. I had positive responses from my students, so now whenever they enter my classroom, there’s music playing in the background and I post a short description of how the song illustrates the specific concepts we’ll be focusing on in class. When I realized that there was a whole field of economics education with economists working on how to include music in their lectures, I found that it was primarily based on microeconomics concepts, which focuses on individuals and how they are impacted by forces of an economy, like consumer demand, rather than macroeconomics, which is the study of the whole economy. So, I realized I could help build lectures with pop culture references to teach macroeconomics. Using music in this way is really helpful, but using video to introduce new concepts is also incredibly helpful.

I began using clips from movies and TV shows that students have seen and could easily recognize — and well, I do really like Netflix! This began as something fun to add to my lectures and turned into an educational research project, “Using Netflix Original Series to Teach Economics: A Diversity and Inclusion Approach.” I’m working in collaboration with colleague Julien Picault, who is a member of the Department of Economics, Philosophy and Political Science at the University of British Columbia. This project uses 12 Netflix original series, including Narcos, Money Heist and Squid Game, and we’re using these shows to create lecture plans for instructors to use in their classrooms. These series are based all over the world — we have a French series, an American series, a Latin American series and African shows, as well.

Why is it important to include Netflix original series from different parts of the world?

We want students to learn about economics concepts while embracing diversity and inclusion.

In all of my classes, I always add some of my international experience and students have enjoyed that. For example, when we talk about monetary policy and central banks, I show them that there are similarities and differences between the Federal Reserve of the United States and the European Central Bank. So, we not only focus on the American consumer, we look at other parts of the world. When we learn about foreign direct investments, we have to talk about African countries. So, we’re trying to add an international perspective when we talk about economics concepts and encouraging students to look at them with a different view, coming from different countries, different continents and from different economic development levels.

Has this teaching tool helped to improve students’ understanding?

Students, in general, can have trouble grasping some of the economics concepts. They may have heard of inflation, economic growth, monetary policy or fiscal policy, but if I just give them definitions of these terms, it’s not going to stick with them. Now, if I show them a clip of Squid Game, which I’m almost sure they’ve watched, it’s going to stick in their minds and they can remember an example from the show. It’s all about them being able to better remember and also having that change during a lecture from me teaching to doing something different, like watching a clip and discussing how a scene relates to concepts like monetary policy. This starts a conversation with the students and it improves their understanding and increases their motivation.

I have definitely seen some improvement in my students’ understanding of the main concepts of economics. I’ve noticed an increase in students’ grades, but I’ve also noticed that in the way they write essays, you can see that they’re using some of the concepts that we watched from the clips. They really understand it and try to apply it to that particular concept. We want to improve their learning experience and make sure they leave the class with something positive.

Students in my Money and Banking course were offered an extra credit assignment on Money Heist, because this show talks a lot about monetary policies, inflation and money supplies, and it was a perfect fit for the course.

Maybe with the next TV show they watch, they’ll identity economics concepts and send me an email telling me to check it out!

How do you hope to continue building on this research?

My colleague and I have finished the first draft of our research paper and submitted it to publication in a peer-reviewed journal. However, the working paper is available online here. One of our amazing Information Technology students, Erwin Tudose, designed our website, EcoNetflix, which integrates all the video clips and lesson plans in one place. This is what we hope to share with fellow economics instructors. We’re very excited about it!

There’s still a lot to do when it comes to developing economics education and that’s exciting to me. I’m excited by what other researchers will find and that can be part of what I include in my lectures.

I believe we have to update our teaching content. If we use an example from a TV show that none of the students have watched or are familiar with, it may not have the same impact. So, we can update the media references we use. I don’t believe this is the only tool we use in our classes, but we have to realize that students need different media, a different way to learn because they’re all different.