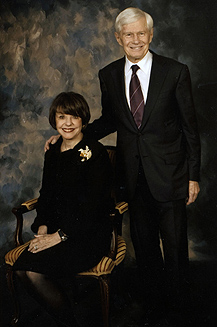 The Malek School of Nursing Professions is named in honor of longtime Marymount friends and benefactors Marlene A. and Frederic V. Malek.

Mrs. Malek, a community activist and health care advocate, is president of Friends of Cancer Research, a nonprofit organization that raises awareness and provides public education on cancer research. She earned her Nursing degree at Marymount in 1979 and has been committed to supporting cancer research ever since. Mrs. Malek serves on the Board of the Duke University Cancer Center and is a member of the Cancer Leadership Council at the Mayo Clinic in Rochester, Minnesota; a trustee of the MD Anderson Comprehensive Cancer Center in Houston, Texas; and an appointed member of C-Change (formerly the National Dialogue on Cancer). A member of Marymount University’s Board of Trustees since 1984, she currently serves as the board’s vice chair.

Mr. Malek was founder and chairman of Thayer Lodging Group, a private equity firm, and founder and chairman of Thayer Capital Partners. He also served as president and CEO of Marriott Hotels and Northwest Airlines. In addition, Mr. Malek was an advisor to Presidents Nixon, Ford, Reagan, and George H.W. Bush, serving in a variety of capacities. He was a graduate of West Point and the Harvard Business School.

Marlene and Fred Malek have received numerous awards, including the Corporate Citizens of the Year Award from the Wilson Center for Scholars. At Marymount’s 2011 Commencement ceremonies, they were presented with the University’s highest honor, The Majella Berg Medal, in recognition of their lives of leadership and service.