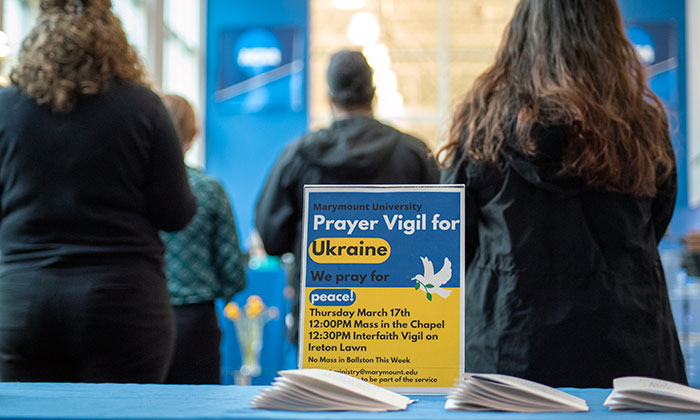 Russia’s brutal invasion of Ukraine may seem like a world away for most Americans – but for one Marymount University student, who was born in Ukraine and has family members scattered across the country, it hits much too close to home.

Senior Graphic and Media Design major A.C. asked for his full name to be withheld due to threats against his own and his family’s safety. An American citizen since moving to the U.S. as a child, he has numerous Ukrainian family members whose homes are in the capital city of Kiev and the country’s second-largest city, Kharkiv, both of which have been prime targets of the Russian assault.

He recently returned to Marymount’s campus after journeying to both Poland and Ukraine during the University’s spring break, as he strived to help his family flee the destruction caused by a crisis that has led millions of refugees to leave their homes.

“It’s a lot worse of a situation than even what’s being shown on TV. When I was in Lviv, every five to 10 minutes the sirens would go off, warning anyone and everyone to find shelter or evacuate,” A.C. said. “Near the edge of Lviv, I saw several bodies just laying outside buildings because there aren’t really any spots right now to bury victims. It was all very nerve-wracking.”

While some of A.C.’s family were successfully evacuated westward and are temporarily resettled in Poland’s capital of Warsaw, other family members currently in Kiev have refused to leave their home country and are determined to brave an uncertain and dangerous future as Russian troops seek to encircle the city.

“I pleaded with them, begged them to leave…told them, ‘you will die if you stay here.’ While I admire their patriotism for Ukraine, it’s inevitable what will happen and I would rather them be alive than sacrifice their lives,” A.C. explained. “They’re attacking churches, hospitals, apartment complexes. They’re just openly targeting civilians because of their nationality – it is genocide, and there’s no other way to describe it.”

Although he left his birth country at the age of six, A.C. has continuously sought to develop a deeper understanding of Ukraine’s history, culture and people. Attending college just outside Washington, D.C., he’s taken advantage of Marymount’s close proximity to sites such as the Ukrainian embassy and Ukrainian churches that offer volunteering opportunities, language classes and festival events that feature popular Ukrainian dishes like borscht, varenyky and more.

Since the invasion began three weeks ago, A.C. has traveled inside the nation’s capital on several occasions to make his voice heard – both at protests outside the Russia embassy as well as at Lafayette Square, where demonstrators have expressed their support for Ukraine and called on the federal government to hold Russia accountable.

“If he’s successful, Putin won’t just stop with Ukraine,” A.C. said. “Finland, Estonia, Poland and others will all be in danger.”

Meanwhile on campus, A.C. has played a key role in Marymount’s efforts to raise awareness and solidarity for Ukraine and its people. He wrote and delivered a poem called ‘My Ukraine’ during Thursday’s interfaith prayer vigil for peace held in the Lee Center, a work that described ‘a land of innocence and prosperity…filled with fields of sunflowers glistening…with magnificent churches and cathedrals,’ while also reflecting on the country’s war-torn past and present.

A.C. will also participate in a facilitated academic discussion taking place Monday at 4 pm in Caruthers Hall on Marymount’s Main Campus, ‘What is Happening in Ukraine?’, featuring Professors Chad Rector and Ian Hopper.