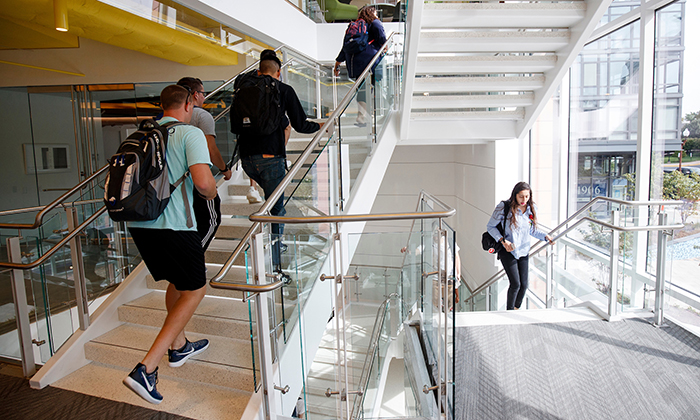 The growth of the Hispanic population in the U.S. has boomed in recent decades, and Hispanics now make up the largest racial or ethnic minority in the country, per U.S. Census data. With that growth has come the emergence of Hispanic Serving Institutions.

“Once they are certified it gives them eligibility to compete for grant programs set aside for HSIs,” says Antonio R. Flores, president and CEO of the Hispanic Association of Colleges and Universities, known as HACU.

Flores adds that those funds enable colleges to continue to recruit Hispanic students and to support them once on campus, guiding students to graduation day and setting alumni up for employment afterward.

“We are all about trying to provide and broaden access to those who have been historically underserved, to provide them leadership opportunities, and then to promote the next Hispanic leaders across the country,” says Kimberly Andrews Espy, provost and senior vice president for academic affairs at the University of Texas at San Antonio, which has been recognized as a Hispanic Serving Institution since 1994.

In some ways, HSIs can be thought of as akin to historically Black colleges and universities, with a track record of enrolling minority populations that often have been underserved at predominantly white institutions. However, unlike HBCUs, which were founded specifically for Black students amid segregation, many HSIs have simply experienced significant growth in Hispanic enrollment at colleges where they once made up a smaller percentage of the student body.

How Many Hispanic Serving Institutions Are There?

Flores’ organization recognizes 539 nonprofit Hispanic Serving Institutions, including schools in Puerto Rico and community colleges. The Department of Education, by contrast, recognizes closer to 400. HACU’s numbers include emerging HSIs not yet certified.

“Usually the federal government is lagging behind our numbers, because they only list the certified institutions, not the ones that we might have already identified, but not yet certified,” Flores explains.

The number of Hispanic Serving Institutions means there are options for undergraduates in most states. Some states, such as California and Texas, have vast numbers of HSIs while others have relatively few. Some states have no full-fledged HSIs but do have institutions that are approaching that designation, per the HACU website.

Experts encourage students interested in HSIs to do their research to find the right fit.

“This will vary by student and institutional type,” Cyndia Morales Muniz, director of HSI Culture and Partnerships at the University of Central Florida, wrote in an email. “Students have different needs and desires of what they would want from any institution. HSIs themselves are a diverse set of institutions, ranging from community colleges to Research I Universities in urban and rural environments.”

In particular, experts encourage students to think about educational goals when choosing a college. Students should look for colleges with programs that align with their career goals; mentorship and internship opportunities; funding to pay for school; and campus resources to guide students to graduation.

At Marymount University in Virginia, which was recently named the first Hispanic Serving Institution in the state, President Irma Becerra sees an opportunity to place graduates in areas where Hispanics are underrepresented, such as the health fields and careers in science, technology, engineering and math, commonly known as STEM.

“Given our strong emphasis in STEM, both in the health aspect and in the technology aspect, we are hoping to attract more women and more minority students to STEM fields, which is something that is important not only for the competitiveness of this country but also for national security,” Becerra says.

William Bisset, the university’s vice president for enrollment management and student affairs, adds that the school has a modest endowment. The newfound status as a Hispanic Serving Institution means additional funding opportunities and thus more financial aid to help students pay for college.

Espy says specific cultural and language programs may be available at Hispanic Serving Institutions that aren’t found elsewhere. She notes the Mexican American studies major offered at UTSA, as well as heritage language programs available to students who grew up in Spanish-speaking households.

An emphasis on faculty mentoring at UTSA helps guide students to graduation, Espy adds. She also notes that the university is trying to increase its faculty of color to more effectively reach a diverse student body.

Morales Muniz encourages students to explore colleges on a deeper level beyond HSI status: “Designation does not automatically translate into culturally responsive practices. That is up to the institutions themselves to determine if and how they transform the ways in which they serve their students.”

How to Learn More About Hispanic Serving Institutions

Despite the growing numbers of HSIs, experts feel that more exposure is needed.

“I think that people are not aware of what it means (to be an HSI) in general unless you live in an area like Miami or Texas, where a high percentage of the population is of Hispanic origin,” Becerra says.

She also notes that Hispanic Serving Institutions often serve a broad range of students, including those from various countries, which provides greater opportunities to learn about other cultures and hear diverse viewpoints.

Students can learn more about HSIs by exploring the websites of HACU, the Alliance of Hispanic Serving Institution Educators and the Department of Education, among others, and by reaching out to individual colleges.

Morales Muniz encourages students to ask about HSI initiatives at the colleges they are interested in: “The way in which institutions acknowledge, embrace and leverage their HSI identity will vary across the board.”

Considering the growth of the Latino population in the U.S. and the workforce in particular, Flores sees the role of Hispanic Serving Institutions as one of ever-increasing importance in the higher education landscape.

“We as a country will only be as successful as we are able to provide the best quality levels of education for this population that historically has not been well served by higher education,” Flores says.