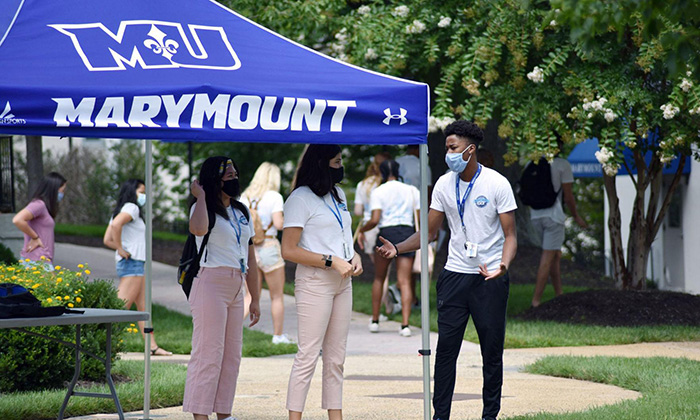 By Irma Becerra and James Dyke

Last year, Marymount University achieved a significant milestone when it was independently designated as the first Hispanic-Serving Institution in Virginia — an achievement acknowledged by Gov. Ralph Northam in his State of the Commonwealth address.

By 2030, the Latinx population in the U.S. is expected to increase by 25%. As this group grows, so does the need to create a more equitable pathway to success through higher education. Latinx success in higher ed will not only benefit the Latinx community but our economy as well. Experts predict we will need 6.2 million more Latinx students to earn a college degree over the next 10 years just to meet workforce needs.

The deck, however, is stacked against Latinx students. They have the lowest educational attainment rate for any major racial group in the U.S., with just 19% earning a bachelor’s degree or higher compared with 25% for Blacks and 35% for whites. In Virginia, we see similar roadblocks for underrepresented groups in both college degree completion and high school student enrollment in college.

Last fall, higher education nationally experienced a 5% drop in Latinx undergraduate enrollment after a decade of steady positive growth for this group. Further, as remote learning became a dominant issue in American education, barriers based on race and ethnicity became increasingly apparent. As U.S. Secretary of Education Miguel Cardona said, “Equity is a big factor for us moving forward. Institutions like HSIs play a major role in that.”

Throughout recent history, Latinx students have faced similar obstacles that have impeded Black students on their academic and professional journeys. Fortunately, as the nation continues to navigate a racial reckoning in an earnest effort to repair the damage done by generations of discrimination and inequitable access, we see an increased awareness of our responsibility to support all minority-serving institutions.

In Virginia, as our leaders seek to solve issues relating to diversity, equity and inclusion, they must do so in a way that positively impacts both underserved populations to make a meaningful difference and to fulfill the commonwealth’s future workforce demands. Maximizing resources and funding for Virginia’s five Historically Black Colleges and Universities, as well as its sole HSI, is necessary to achieve Virginia’s vision of becoming the “Best State for Education.”

By teaming up to collaborate and present a united front on behalf of students from underrepresented groups, HSIs and HBCUs, as well as our commonwealth and its business community, have much to gain. For that reason, as the governor and General Assembly prepare the next state budget in January 2022 and as the Congress acts on reauthorization of the Higher Education Act, we urge them to:

For Virginia to meet its overall goals for degree attainment to grow our economy, serving lower-income students and those from underrepresented groups will go a long way toward a brighter future for every citizen in the commonwealth.