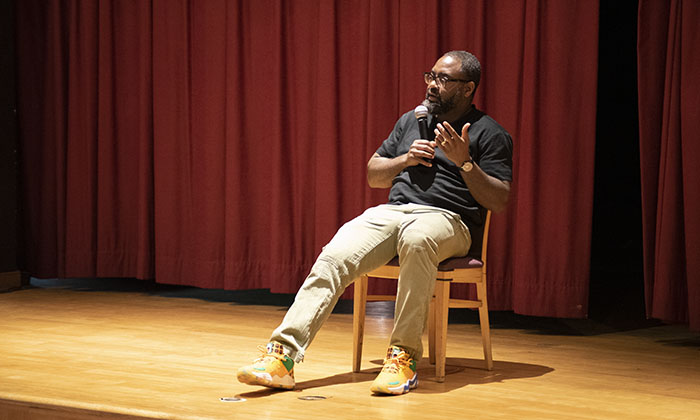 In an auditorium filled with first-year Marymount University students eager to see the University’s Spring Visiting Author, Poet Reginald Dwayne Betts asked a simple question — what is the difference between poetry and prose?

The distinction would come to be the foundation of Betts’s message to the room full of students, Marymount professors and staff members, all gathered in Marymount’s Reinsch Library Auditorium to hear from Betts as part of the University’s Spring Visiting Author Series.

Marymount’s Literature & Languages program hosted the event, in partnership with Arlington County Public Library. The Visiting Author Series was established in 2011, and includes a common reads curriculum for students in EN 102 that features the work of impactful authors.

As a 16-year-old, Betts and a friend committed a carjacking. Betts was arrested, charged as an adult and sentenced to nine years in prison. After his release in 2005, Betts pursued higher education and eventually became a graduate of Yale Law School.

During his visit at Marymount, Betts acknowledged that many of his poems were clearly written from his own experiences. But, like many writers, he takes on the ‘identities’ of others to express an even greater range of experiences — marking the difference between poetry and prose. Poetry allows Betts to claim ownership and embody experiences and points of view beyond his own, while prose can limit points of view to those of the narrator or author. When Betts says ‘I’ in a poem, he doesn’t necessarily mean himself. 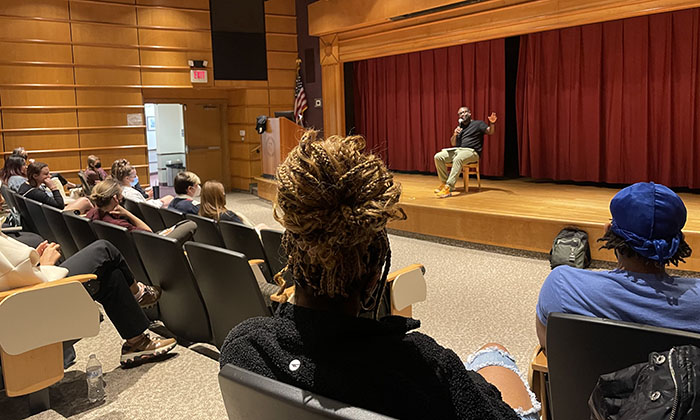 Those in attendance were treated to Betts reciting ‘House of Unending,’ the final poem in ‘Felon’ that is a reflection of a past self with memories of incarceration. Betts writes:

Did a stretch in prison to be released to a cell.

Returned to a freedom penned by Orwell.

My noon temptation is now the Metro’s third rail.

In my wallet, I carry around my daguerreotype,

A mugshot, no smiles, my name a tithe.

What must I pay for being this stereotype?

“For our students who often think of a book as an ‘it,’ a scroll of words, this program quite literally brings writing alive for them,” said Dr. Bess Fox, Associate Professor of Literature & Languages and Director of Composition at Marymount. “They come to understand that books are written by people using words to try to change perspectives and, ultimately, change the world. Betts, for instance, wants us not only to rethink the way we dichotomize ‘victim’ and ‘criminal’ but also to understand, confront and interrupt the violence that rends our world.”

Following the event, students and faculty formed a long line to have their book copy signed and to have a few more moments to connect with Betts, who reflected on the ‘exciting’ opportunity to visit Marymount and answer students’ most pressing questions.

“That my presence meant something to them is really generous of them to convey to me. And it makes me feel like this matters in ways I didn’t know.” 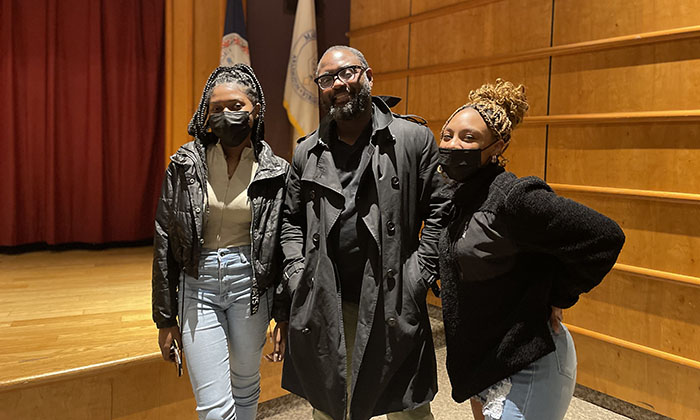 Click here to visit the website of Reginald Dwayne Betts for more on his poems, essays, books and more.