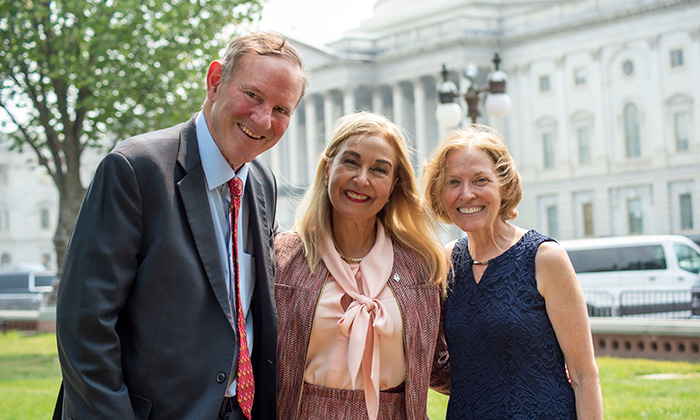 Organized by the American Business Immigration Coalition (ABIC), which partnered with groups such as the Presidents’ Alliance on Higher Education and Immigration, this past week’s events were the culmination of months of public town halls, press conferences, events and private meetings with elected officials from both parties urging legislators to work across party lines to address acute labor shortages and bring the U.S. immigration system into the 21st century. The Week of Action rose even more in importance after the DACA court decision as well as ongoing labor shortages, leading to large numbers of University Presidents, CEO’s, Dreamers and farm workers visiting Washington, D.C., for in-person meetings with members of Congress and the Biden administration.

“Our nations’ Dreamers, through no fault of their own, were brought to this country at an early age. They are deeply ingrained in American communities, have lived here for decades and are American in almost every way – and are now striving to make our nation stronger,” President Becerra said. “However, they face great difficulty in putting themselves through college, as for years they have been unable to receive federal financial aid. This must change, and lawmakers also must come together now to support a pathway to citizenship – something that about three-quarters of polled voters across party lines support.”

In response to the recent court decision, President Becerra and Marymount University joined more than 400 other higher education institutions and business leaders across the country as signatories on an ABIC letter to both Senate Majority Leader Chuck Schumer (D-NY) and Minority Leader Mitch McConnell (R-KY), which urged for the passage of the bipartisan DREAM Act. This bill would allow immigrant students without lawful status who were brought to the U.S. as children and grew up in this country to earn lawful permanent residence and eventual American citizenship. It would also finalize the legal questions surrounding the DACA program, which has helped nearly 800,000 young people since 2012 gain a temporary reprieve from deportation and a work permit.

On Wednesday, President Becerra participated in a press conference outside the U.S. Senate featuring Sen. Schumer, with speakers all stressing the message that “inaction is not an option.” The next day, she attended a White House meeting with Cedric Richmond, Senior Advisor to the President; Julie Rodriguez, Director of the White House Office of Intergovernmental Affairs; and Esther Olavarria, Deputy Director of the Domestic Policy Council for Immigration. She also met with Sen. Susan Collins (R-ME) and Sen. Mike Braun (R-IN) to discuss common-sense immigration solutions that benefit higher education and economy as a whole.

“I am so personally invested in this issue because I myself am a Cuban-born immigrant, and when I was eight months old, my family was forced to leave Cuba with nothing,” President Becerra explained. “Luckily at that time, U.S. policy towards Cubans was welcoming and we were granted U.S. citizenship as political refugees. This meant when it came time for me to attend college, I could receive Pell Grants, federal loans and work to put myself through classes. Unfortunately, our Dreamers today, many of whom escaped violence in their home countries much like I did, can’t take advantage of those opportunities.

“DACA has provided some temporary benefit, as 93 percent of Dreamers have said the program has allowed them to pursue educational opportunities that they previously would not have been able to – but more is needed.”

Marymount University is a founding partner of TheDream.US, the nation’s largest college access and support program for Dreamers, and is also the first designated Hispanic-Serving Institution in the Commonwealth of Virginia. In June, the University also hosted Virginia Governor Ralph Northam for a ceremonial bill signing that makes Virginia students eligible for state financial aid if they are eligible for in-state tuition, regardless of citizenship or immigration status.