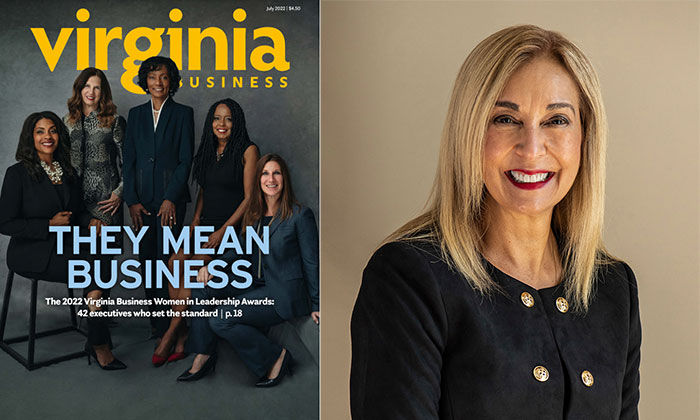 This week, Marymount University President Dr. Irma Becerra was recognized by Virginia Business in its 2022 Women in Leadership Awards, which identify female executives in the Commonwealth who have excelled in their careers and are paving the way for other women to follow in their footsteps.

In the second year of the Awards, Virginia Business received more than 300 nominations — exceeding nominations from the inaugural year by more than 100. Ultimately, 42 women leaders were chosen from large, midsize and small businesses and nonprofit organizations across Virginia to honor in 2022.

This year’s Women in Leadership winners included executives in traditionally male-dominated industries — engineering, construction and maritime — as well as fields encountering staffing or financial challenges, such as health care and higher education. Some of these leaders have overcome challenges to achieve success, and all of this year’s winners have made time for mentoring other women along the way, making sure that the doors they’ve walked through remain open to future generations.

To qualify, nominees must be based in Virginia and hold C-suite or equivalent positions at for-profit businesses, nonprofits or educational institutions. In deciding winners, Virginia Business’ editor and publishers considered overall career accomplishments, community engagement and mentoring work with women and girls. President Becerra was honored in the ‘Large Business’ category.

Below is the Virginia Business award profile on President Becerra — click here to see the original article on their website.

“From immigrant to university president in a lifetime” is an extraordinary story, but one that she credits in part to the opportunities the United States offered her. “We left Cuba with no assets,” she says, “but I learned from my grandmother that no one can ever take away your education.”

So, instead of partying like so many students, Becerra “hunkered down and focused” on her studies, earning degrees from the University of Miami. Losing everything can turn people into pragmatists, and she followed her family’s advice to pursue a field that had good job prospects, becoming the first woman to earn a doctorate in electrical engineering from Florida International University.

“I prepared my whole life for this job,” Becerra says of her path to becoming president of Marymount, a private, Catholic university, in 2018. Since then, she has instituted a plan to raise the school’s reputation for innovation and added market-driven programs that prioritize career preparation.

“I love to affect the lives of students and what they can accomplish,” Becerra says, and she believes students can accomplish a lot if they only prepare and persist like she did. “People may say no, but you have to be ready to try again,” she tells them. “I look at setbacks with gratitude because each one has made me better.”