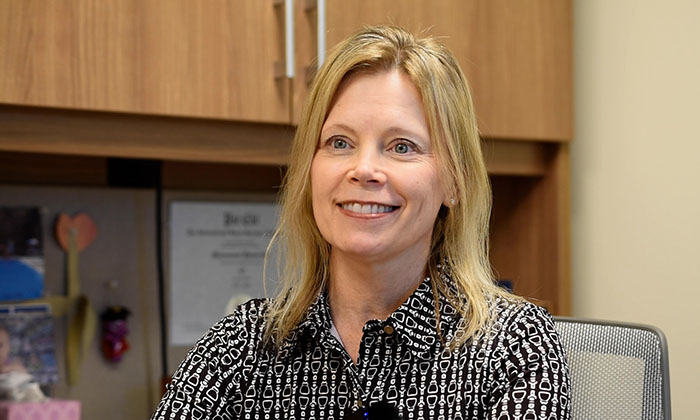 In this episode of “Faculty in Focus,” Dr. Linda Cote-Reilly, Professor of Psychology, discusses research she’s worked on for more than two decades that provides a better look at child development in a growing population of families across the nation.

Like many people who are interested in psychology, I originally thought I’d become a clinical psychologist. And then, my parents, when I was in high school, they started taking in foster children. I really saw in that instance how important parenting can be to your development, your sense of security and your sense of safety. At first, I wanted to help children like them, then I realized it’s really difficult to help children if the parents are not on board, it’s impossible really. So then, I decided to switch to developmental psychology.

What is the focus of your research?

My research is on mother-infant interaction and children’s development in immigrant families. I became interested in learning about other cultures when I was in college and took an anthropology course. I feel like if I had discovered anthropology earlier, there’s a chance I would have become an anthropologist. What I do really combines those two interests — I read a lot of anthropological literature about parenting, child care and children’s development, and this is really the marriage of those two disciplines.

I’ve wondered why people aren’t studying this area of child development in immigrant families because, right now, a quarter of the children in the United States have at least one immigrant parent, so this is a huge and growing population. I would say that a significant amount of what we read in human growth and development textbooks is based upon research with European-origin families. We aren’t doing a good job of representing human development if we’re not talking about everyone.

I began my research in the late 1990’s when I was a postdoctoral fellow at the National Institutes of Health in collaboration with Dr. Marc Bornstein. When I came to his lab, he had data from all over the world. He had data from middle-class European-American families here in the U.S., had data from mothers and infants in Japan, South Korea, Argentina and many more countries. So, my research fits in that I’m looking at Japanese immigrants, South American immigrant and South Korean immigrant families here in the Washington, D.C., area.

The data from this longitudinal study is fully collected and we’re currently analyzing it and preparing it for publication.

What have you uncovered about child development in immigrant families?

One thing that this research helps us do is to see if there’s any similarities across immigrant samples or whether there are differences among them. We see that what predicts the child’s vocabulary size at 20 months, it’s mother’s acculturation level predicts how much she speaks to the child in English, which predicts the child’s vocabulary size in English. Immigrants in all three groups had smaller vocabularies at 20 months, and that’s just because learning two languages at once is a more complicated task.

Another key insight is that for many European-origin psychologists, what we learn is that infants need to develop a sense of agency, meaning that they can direct what they’re doing and where they’re going to develop independence. My research, particularly in the Japanese and South Korean immigrant families, really calls that into question. Because what we see when we look into mother and infant interactions among these immigrant families is that when it comes to object-directed interactions, meaning interacting with toys, the mothers are more directive and likely to take the lead in those interactions than the European-American mothers here in the U.S., and more likely to take the lead than their infants are.

The challenge for the immigrant families is that they kind of have to merge the two cultures, that of their heritage country and the culture here in the U.S., and figure out how they’re going to do that. For some, it’s a 50-50 split. For other families, it may be an 80-20 split, while others may try to completely preserve their cultural beliefs, practices and customs or completely adopt the European-American ways.

In what other ways are you sharing more of your research in child development?

In the fall, I worked on a chapter in the “Handbook of Parenting: Social Conditions and Applied Parenting,” a book published by the American Psychological Association. This chapter in the book itself is geared toward pediatricians and psychologists, other people who work with children generally. Our chapter, of course, is on immigrant families. We really hope that it will be read by clinicians and physicians, and I wrote it with a pediatrician and a nurse and also a Marymount Honors student. We hope that when a parent goes into a physician’s office, they realize there are other ways of being, that the European-American way isn’t necessarily what’s happening at home.

You know, the idea that the thoughts, beliefs, customs of European Americans are what is American, that is changing. It’s changing pretty dramatically.